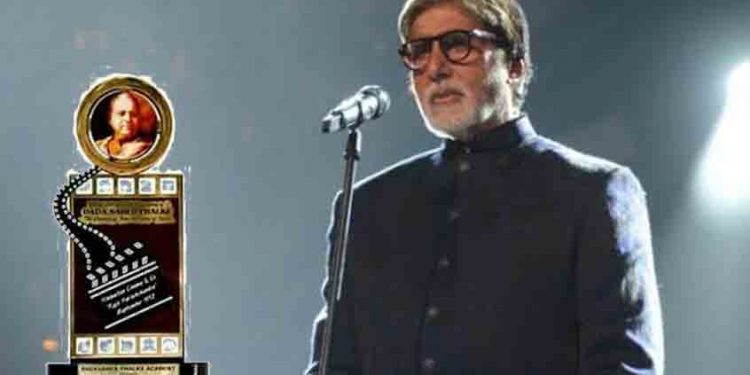 After entertaining Indians for last five decades, Amitabh Bachchan, the tallest megastar of Bollywood on Sunday was honoured with the prestigious Dada Saheb Phalke award for the year 2018.

At the age of 76, the Big B added another colourful feather on his hat. The Dada Saheb Phalke Award was conferred on him for his contribution to the Indian film industry.

In 1969, Amitabh Bachchan made his debut in Bollywood with Saat Hindustani, and continued to entertain millions as the angry young man.

And even after five decades of his service to Bollywood, the BigB continued to be the all-time best.

The Dada Saheb Phalke Award is the highest recognition in Indian cinema. The award was conferred on the late Vinod Khanna in 2017.

BigB won four National Film Awards for Agneepath, Black, Paa and Piku. He also received the Padma Shri in 1984, the Padma Bhushan in 2001 and the Padma Vibhushan in 2015.

The announcement for the Dada Saheb Phalke Award was delayed this year on account of the Lok Sabha elections 2019.

Even at the age of 76, Amitabh is busy with innumerable projects.

He continues to be the source of inspiration for every young entrant in Bollywood.

The 66th National Awards was held on December 23 in New Delhi. But, Amitabh Bachchan was ill, and could not attend the ceremony.

President Ram Nath Kovind on Sunday had invited all the National Award winners to the Rashrapati Bhavan for a get-together. During the get-together, Amitabh Bachchan was given the award.

Amitabh Bachchan was accompanied by his wife Jaya Bachchan and son Abhishek Bachchan.