Students' initiative: Film festival ‘JONAKI' to be organised on Nov 29 & 30 for promoting film culture among students through regional films 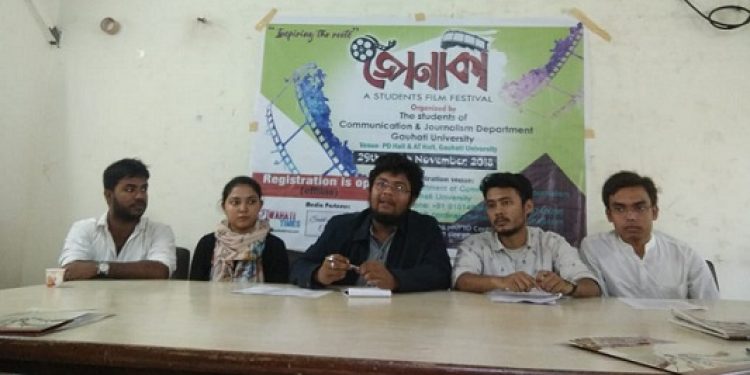 The students of the Department of Communication and Journalism, Gauhati University (GU), have geared up to organise ‘Jonaki’ – a film festival, on November 29 and 30, 2018.

The film festival will be held at the PD Hall and AT Hall of Gauhati University.

“The festival has been named after Assam’s first cinema hall Jonaki of Tezpur in Sonitpur district. The festival is based on the theme ‘Inspiring the Roots’. The objective of the festival is to encourage and celebrate filmmaking which will inspire the youth,” said Subrata Dutta, co-ordinator, Jonaki during a press conference at Guwahati Press Club on Tuesday.

He also said, “The festival will also promote film culture among the students through regional films.

The festival will also be a platform to create an atmosphere allowing the viewers to experience aesthetically pleasing films.

“The sole motive of the festival is to promote language films from Northeast among the students as well as provide a roadmap for aspiring filmmaker to make films about its people,” added Dutta.

The two-day festival will showcase 13 films from across the Northeast.

The inaugural ceremony of the festival will start at 10 am on November 29.

The screening of the films will start from 11 am onwards.

Some of the films that will be showcased in the festival are: ‘My Father’s Letter’ directed by Kanga Lovejoy from Manipur; Arunachali film ‘Crossing Bridges’ directed by Sange Dorjee Thongdok; Nagamese film ‘Nana-a Tale of us’ directed by Tiakumzuk Aier; Bodo language film ‘Silingkhar’ directed by Bhoda Kherkatary; Rabha film ‘Orang: Strangers in the Mist’ directed by Suraj Duwarah and Narayan Seal directed Mishing film ‘Li:Len’ (A Ray of Hope).

The participants (any UG and PG students) will also be able to attend the workshops on filmmaking and script writing.

“Registrations for the festival are going on at the Department of Communication and Journalism of Gauhati University,” said Dutta.

The Department of Communication and Journalism of Gauhati University, which was started in 1967.

The Department celebrated its Golden Jubilee in 2017-18.