‘The Brahmaputra: Our Birthline’ and another poem by Reema Das 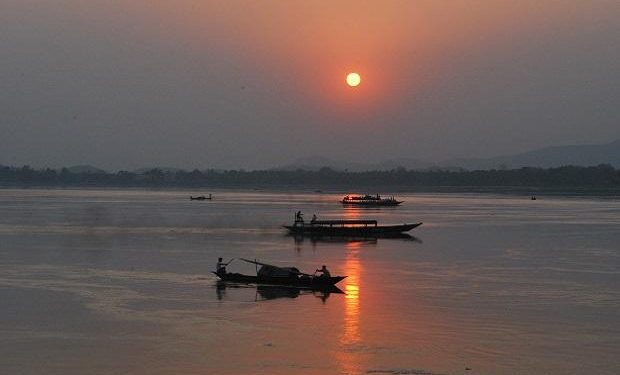 Reema Das is a teacher by profession and poet by passion.  She is based in upper Assam’s Tinsukia.  She is the author of book Out Of Shoes, and had her poems published in the newspapers, journals, national and international anthologies. She is also an executive member of Heart Care Society of Assam, Tinsukia Chapter.  She teachers at Tinsukia English Academy.

My grandmother believed in the Holy and Avatar quality of mighty Brahmaputra.

Her daughter in law was sixteen; a newly wedded bride, veiled from the gaze of the outside.

Within, her marriage stood plagued by a four year drought; yet to spawn a child.

She was none other than my mother, who, at dawn, was reintegrated by my grandmother to dip into the river at Saikhowa ghat.

It was a miraculous blessing that made her family proud with a cricket team of children.

Now she is no more, and the Brahmaputra, the legendary river lives on and so we

Such was the intense feeling of my grandmother for this river.

We call ourselves, the children of Brahmaputra.

The crystal clear and pure water whether we call it Siang, Lohit or Brahmaputra has been a lifeline, a pure breath,

We played, we drank its water, we had picnicked on the banks , saw fish flipping, migratory birds flocking, the blue river was known for its purity.

Now it is contaminated, water colour changed from blue to black: a mud of insidious desolation…

This river once gave life to all, now sleeps still with a wait; who would bell that tolls to save His life?

The Bard sang to inspire the patriots and soldiers during Chinese Aggression, now lies in a monument and in our memories…

Who would call him from his deep sleep?

Soon I crossed the Bhupen Hazarika Setu, his Assamese song mingled in the air, near the Police Kiosk

Rise And Fall Of Brahmaputra

The rain comes with its solitary walk

On the Foothills of Himalaya, when

The scorching Sun scratched every skin.

Every day, it falls brought relief and

Cattle, crops and the peace of mind.

The river surged up and there is no fall

Villages near the banks, fields and grassland.

Kaziranga, too drown under water

So are rhinoceros, tiger, deer, elephant

The highland is replaced with quarries

Every year our pride –

Our state drowns in the waters

They watch in the television.

And the live telecast of people’s grave.

Who will put a flagship to end this?