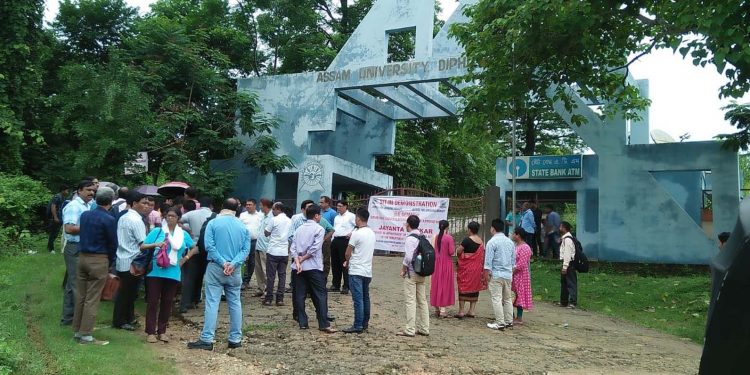 The entrance gate of Assam University Diphu Campus (AUDC) was locked by students of AUDC in protest against alleged illegal appointment of laboratory attendant in the university campus.

The Assam University Diphu Campus is located at 8 Mile along Lumding Road.

AUDCSU general secretary Rowel Teron, while talking to media persons, said, “The authority has selected Jayanta Sarkar as laboratory attendant just simply because he belonged to the SC category. But when we checked the advertisement there is no mention of any reservation for that particular post.”

“So it is illegal appointment and we demand that Sarkar be removed and Rongpi be appointed in the said post as he (Rongpi) has been working for the last 10 years as a laboratory attendant,” added Teron.

Teron further informed that on February 23, a memorandum was also submitted to Vice Chancellor of Assam University, Silchar, Dr. Dilip Chandra Nath, in this regard.

“Until and unless Sarkar is removed and Rongpi is appointed in the post, the AUDC gate will remain locked,” Teron asserted.

Pro-Vice Chancellor, AUDC, Prof. Sivasish Biswas, when asked by media persons, said, “I know Jonasing is experienced, but in the advertisement there was no mention about experience. It is an unreserved post and is open for all. Maybe based on written test, Jonasing did not get it.”

Meanwhile, the Pro-Vice Chancellor, Assam University Diphu Campus, in a press release said it is concerned with the demands of the AUDC Students’ Union regarding the appointment of laboratory attendant of Physics department and accordingly the matter has been taken up by the higher authority at Assam University, Silchar.

The authority assured to constitute an enquiry committee to look into the selection process.

The report of the committee will be placed for appropriate decision of the competent authority.

In view of the assurance given by Assam University, Silchar and considering the examination of the PhD course and PG entrance examinations from July 16, 2019 onwards, the AUDC authority appealed to the protesting students’ body to reconsider their agitation.