Only Nishtha Barman hakong from Don Bosco College in Tura figured in the top ten list securing the sixth position.

The results for Science, Commerce, and Vocational streams were declared on Thursday.

In the Science Stream, 2732 passed the examination out of 3724 candidates.

The overall pass percentage stood at 74.58 per cent. 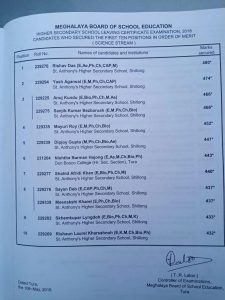 In the Commerce stream, 1834 students passed the examination among a total of 2325 candidates.

The overall pass percentage in the Commerce is 79.84 per cent.

Chongdeinem Guite topped the Commerce section with a total of 443 marks.

In the Vocational Stream, five among the six candidates who had taken the examination manged to pass.