Though the title at the top is in Assamese, any reader would note, just below the painting “Hungry” in the cover by the artist-poet there is written in English “In ‘D’ Language of Painting & poetry”.

This is the title for the English part for all 49 poems translated by ace translator Debashish Bezbaruah and put in the rear section.

The poet literally bowls you over in the very first delivery – To me you are beautiful / As you do not belong to me / Had you bee mine / He, too, would’ve / Found you pretty. In another he writes – When death too turns into/ A trade of buying and selling emotions / This battle for garlanding and paying tributes / Before the mortal remains ….. The sentiment is carried – Two poets tread along / With unlike philosophy / Death’s a trade for one of them / Sale and purchase of emotion / Death’s but an art / For the other. 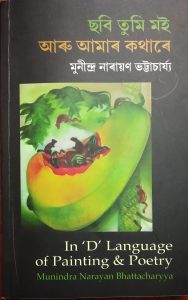 He writes, rather paints with words, various facets of life and also highlights so many issues in a, one can say, satirical tone, that makes one enjoy and sit back at the same time. Notice this – I drew a line/ In a simple way / To make my life / A little straighter / In the very first step / I found my feet slipping/ So again I drew / Two arches / On either side of mine / To straighten my life / A bit farther

One poem extremely relevant at this moment appears time winning  ~ We protest always/ seeking justice/ Bring out rallies/ On the highway/ Wishing to get/ Support of few others/ Lathicharge / Firing / Tear gas / In these too/ There’s a ploy to gag the voices /People get martyred/ With or without bloodletting/ Condolence meeting or resolution/ Song dance and drama/ All go on unabated amidst all these/ To share grief with the bereaved / Demands are gradually made / for a memorial tomb / To pay tribute to them together / The memorials come up in time / Then inauguration, illumination and fiery speeches / Reverberates around the martyr’s memorial / These turn in time into bird’s nesting place / No one finds time then / To enquire about them / Change of guard then takes place / And once again / Set off / New issues / New revolts / New protests / New bullets / New martyrs / New memorials / The same old celebration of days / Like in the time of our ancestors / They are keeping hence grandpa’s statue / In the market place / The one that is covered with crow droppings ……

This is the second such venture by the same poet translator combination. The Assamese and English section had two separate prefaces – while the Assamese part is penned by Sahitya Akademy Yuba Puraskar winner Bijoy Shankar Barman, the English section has been covered by writer and critic Bibhash Choudhury.

The back cover has been adorned by a comment from noted art critic and story writer Mouchumi Kandali.

As the poet says in his foreword, it is to be regarded as poetic rendering of the things that are discussed in the artist’s studio from time to time … many have described this as an exercise on postmodern poetry, while for others it is prose in a different form. I am but merely trying to purge my thoughts, like layers of paint applied on canvas…

Bibhash starts his preface with – The craftsman that the poet is, is in many ways, an installation where the architect and the map-maker converge into one.

Then again, he says – It may so happen that a reader’s marking of the poetic territory may not yield the fruitful produce, another reader would have from an interaction with the same words.

“This is a collection of verse that imbues the sense of life through reference to the materiality of existence, but does not confine itself to that alone, for there is a consistent engagement with worlds that make understanding an art worthy of encapsulation,” he concludes.

One thing that a reader finds missing is that the name of the translator on the cover page or title page.

COVID19: Raincoats to protect doctors on a suicide mission!