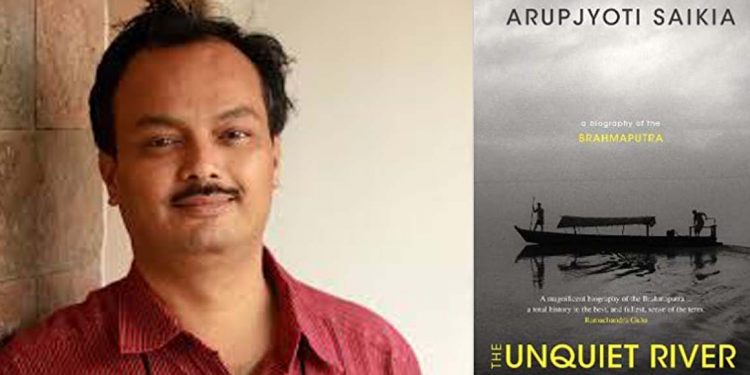 Serious allegations of plagiarism have been made against IIT Guwahati professor Arupjyoti Saikia for ‘copying’ several parts of his book The Unquiet River, published by Oxford University Press.

Sanghamitra Misra, who teaches history in Delhi University, in her review of the book, published in The Book Review recently, points to numerous specific instances of plagiarism by Saikia.

Mishra pointed out that Saikia copied from the unpublished Ph.D thesis titled Rivers and History of former JNU scholar Ritupan Goswami which was submitted in 2010.

Goswami, interestingly, has been missing for several years now.

Saikia’s book has a front cover endorsement by Ramachandra Guha calling it “A magnificent biography of the Brahmaputra…a total history in the best, and fullest, sense of the term”.

The back-cover blurb is by Prof James C. Scott of Yale University and calls it “A superb study…a model of interdisciplinary learning, hydrological knowledge and historical depth”.

She points to “Unacknowledged summation of Goswami’s extensive research on rice cultivation and settlement in riverine belts and sub-montane tracts during the Ahom rule”.

“Saikia’s chapter titled ‘Boats on the River’ is a brazen reproduction of Goswami’s section on boats (‘Boats and Boat Building’, ‘The Kind of Canoes’, Goswami 2010), without any reference to it whatsoever,” she alleges.

Mishra says, “The themes explored in Saikia’s book (the centrality of boats in the Ahom economy, boat-making as an industry and occupation, boats and trading) are nuggets of information culled from Goswami’s original and fascinating exploration of the world of boats and boatmen on the Brahmaputra, but significantly bereft of the history of labour and capital with which Goswami so powerfully animates his story.”

Elsewhere, she writes that “As with the rest of his work, Saikia bowdlerizes Goswami’s work without due acknowledgment, and reproduces these shifts (see Saikia p.439; and Goswami 2010, Chapter 7), the important legislative debates that both supported, and resisted the state’s flood control policy (see Saikia, 439, 473; and Goswami 2010, ‘Brahmaputra’s Floods and the Regional Ruling Class’), the conjoining of hydroelectricity with flood control in the Majumdar-Man Singh report (Saikia, 421-423; Goswami 2010, 375-376), as his own stellar original contribution to the field”.

Misra said, “The section on the canalling of the Kalang river resounds with Goswami’s arguments (Goswami, Chapter V: ‘Imagining Improvement’, Rivers and History: Brahmaputra Valley in the Nineteenth Century, unpublished M.Phil Dissertation, JNU, 2005); the resounding only grows louder in the subsequent section on the exportation of big dam ideology from the U.S. (‘Awaiting Global Experts’) as Saikia paraphrases unabashedly from Goswami’s ‘Imperial Science and Bureaucratic Capital: Laying Down the Foundations’ (p. 382, Goswami 2010).”

This report will be updated if Oxford University Press and Saikia respond to the allegations.

Prior to the plagiarism disgrace, Saikia was in news in the month of February this year when the NIA had interrogated him in a case relating to violent protests against the CAA in Assam.

Six people were killed during the anti-CAA protest in Assam.

He was questioned for several hours by the NIA about his telephone calls to KMSS activists during anti-CAA protests.

NIA had quizzed Saikia after Assam minister Himanta Biswa Sarma had talked about ‘electronic evidence’ that an academician was trying to orchestrate the burning of Assam Secretariat complex during the protest.

“Oxford University Press is firmly committed to supporting publishing ethics and copyright in our academic publishing. These allegations of plagiarism against Arupjyoti Saikia were considered as a component of our extensive peer review process for The Unquiet River: A Biography of the Brahmaputra (ISBN: 9780199468119) and Oxford University Press supports the publication.”