Assam Governor Prof Jagdish Mukhi on Friday said Children are the future of the nation and a society’s greatest asset.

Prof Mukhi said this while inaugurating a Shishu Sanmilan organized by Shishu Shiksha Samiti, Assam under the aegis of Vidya Bharati at Assam Engineering Institute Playground, Chandmari in Guwahati.

In his inaugural speech, the Governor said education plays a very critical role in nation building and also creates an enlightened society which is a prerequisite to continue its forward march.

“Today education has become more job oriented.  Education in the truest sense should be overall development of a child. Along with the school curriculum books, the children should also read other good books to widen their outlook. Children should know geography and history to have a wider knowledge about their country,” the Governor said.

Prof Mukhi also said that India has a proud history.

“Great saints like Srimanta Sankardeva, Kabir, Tulsidas, Gurunanak were born in this pious motherland. Even Vivekanada is an inspiration to the young children who had spread the Indian cultural and religious ethos in the world and has tremendous influence on the youths,” Prof Mukhi said.

The Governor also hailed the efforts of Vidya Bharati for spreading education though its schools in almost every nook and corner of the country. 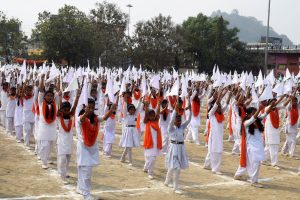 He also said that Vidya Bharati is an acclaimed name in the field of education  where the students are not only infused with patriotic fervour, they are also trained physically, mentally, intellectually and spiritually to face all challenges competently.

It is to be mentioned that to induce Indian culture and traditions through the education and to promote the idea of self-reliance and brother hood living among the children of Assam, the Shishu Shiksha Samiti, a registered society was formed on April 21 in 1979.

The promoters of Shishu Shiksha Samiti, Assam decided that Vidya Bharati school in Assam would be named after the great saint scholar Mahapurush Shankardev, as mark of tribute to his enormous contribution.

At present, 534 schools have been set up with 1.5 lakh students.