Between the lines & behind the words: Abhinav Bhattacharyya speaks about his debut novel ‘The Cauldron of Hope’ 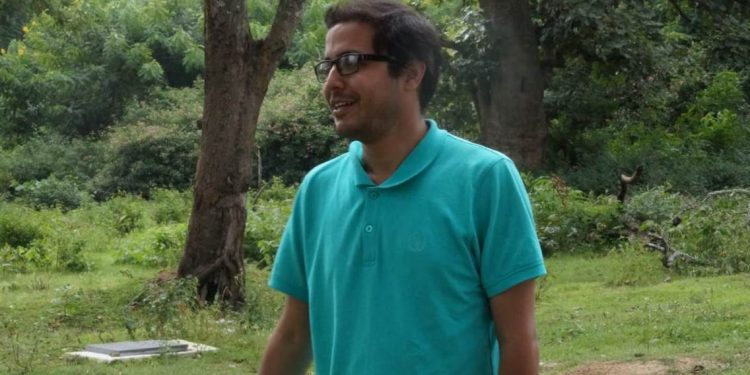 It was a not so cold winter evening in Bengaluru in 2018, when Abhinav Bhattacharyya first told me about his novel. It was in the final stage back then and he was giving the finishing touches to this book. Cut to 2020, amid the global pandemic, it was finally released.

Let us now find out more about the book, the author & the things that led to this novel. Abhinav Bhattacharyya joined me for a chat where we discussed his novel, literature, writing & much more.

Could you tell us a little bit about yourself, about your schooling, college, job & a bit more about your professional life.

Born amidst the unblemished landscape of Assam, I am an IT professional by choice. The Cauldron of Hope is my first attempt at historical fiction.

I studied engineering at Cyprus International University – Nicosia, a place entwined in thick Greek and Ottoman-Turkish history. In my professional career, I have worked for
Consulting Majors like Accenture, before joining Royal Dutch Shell, as a Strategy Consultant.

Presently I am the founder of – Generic Exchange, a company that is an ardent provider of
management consulting, App development, and technology
strategy. 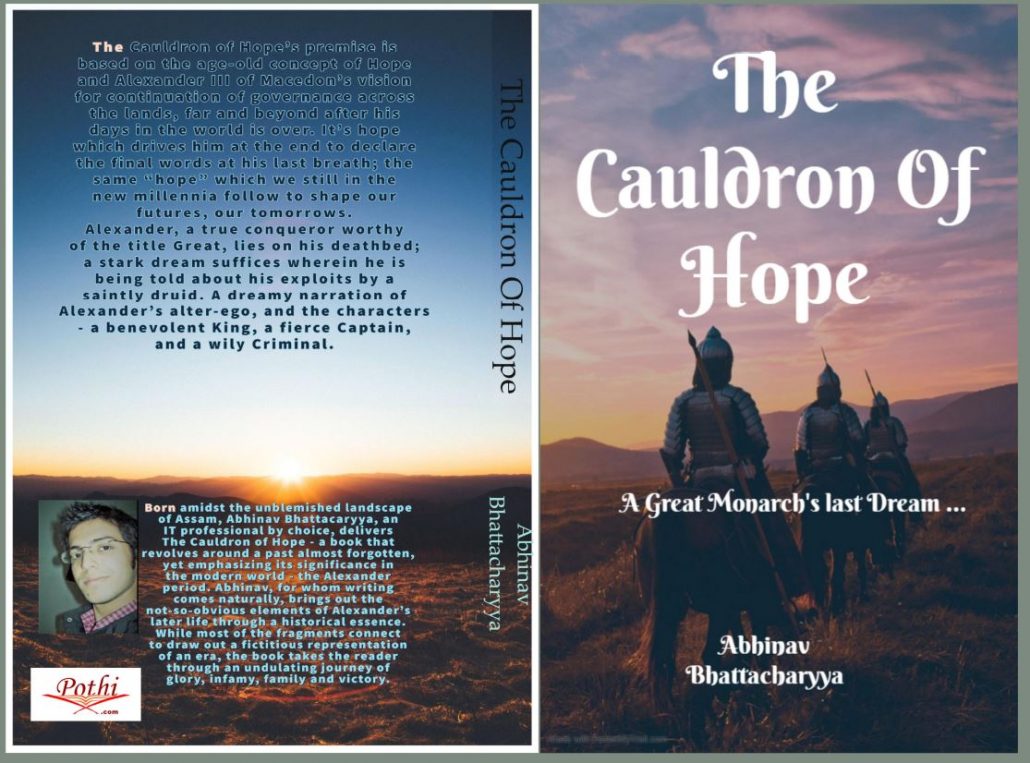 Tell us about your book? How did you arrive on the subject? What was the inspiration behind it?

The Cauldron of Hope’s premise is based on the age-old concept of Hope and Alexander III of Macedon’s vision for continuation of governance across the lands, far and beyond after his days in the world is over. It’s hope which drives him at the end to declare the final words at his last breath; the same “hope” which we still in the new millennia follow to shape our futures, our tomorrows.

Alexander, a true conqueror worthy of the title Great, lies on his deathbed; a stark dream suffices wherein he is being told about his exploits by a saintly druid. A dreamy narration of Alexander’s alter-ego, and the characters – a benevolent King, a fierce Captain, and a wily Criminal.

The King starts off on a tangent of lusty indulgences, neglecting his court and kin. The Captain airs his grievances regarding the casual treatment meted out to him by the king. The Criminal seeks profit, as would any other in his stead, but has a Robin-Hood-esque personality.

The story begins in his homeland, the Near Lands (Constantinople – Present-day Istanbul). The subjects & the nobles have no hope of their frivolous ruler – a completely indulgent wastrel.

The Kingdom’s treasury is well fed by the Captain of the High Seas, but it’s drained through internally by the cunning ministers who have full control of the affairs of the state & the treasury.

The Captain (a personification of Admiral Nearchus – Alexander’s close friend and naval aide) is a valiant soul who is known far and wide through the High Seas (Present-day – The Black Sea). His exploits are magnanimous and also his reputation precedes his self.

The Criminal (a personification of King Porus – Whom Alexander, while retiring from the Hindukush, had made governor of the regions beyond the Caspian Sea), is an orphan without much to uphold but strives every day in the chaotic and corrupt land, stealing for his survival. But, gradually his appetite for glory and industry increases his endeavor and takes on the zenith of the predominant yet masterful art of stealth and strategy.

It all started with a telephonic conversation with a couple of my dear friends. They were talking but destiny had struck me and I was completely in a dream theatre of my own. The entire concept of embedding a book in a great monarch’s last dream was surreal at that point. It worked finally and I could visualize better and accommodate my thoughts in print today.

As a first-time author, what were the challenges you faced in getting your work published? The pros & cons? How difficult was it to get your book published? Can you shed a little bit of light on the entire journey from the manuscript stage to the final end product?

The biggest challenge is getting out of writers’ blocks. My first was right thereafter Chapter 4 in The Cauldron of Hope. I had to wait almost four months, to knock it off.

It’s natural for all writers to get into such blocks, due to various reasons, known/unknown. Also, its good to wait sometimes and re-energize at some point, I feel. Writing is contagious, also very tiring at times. And if one puts goals/ deadlines to it, which never works fine. In fact, the quality takes a dip in such cases. I prefer free flow when it comes to any sort of writing.

Tell us something about your profession. How did you strike a balance between your work & writing?

I am a business owner, predominantly an IT Advisor. I founded –Generic Exchange back in October 2018. Well, writing has been there in my life, since 2018 spring. That was the point where I thought no point waiting any further for the first novel. I feel once you start writing, weekdays/ weekends don’t matter. There is no difference and there is absolutely no time for time once you start. It’s a continuous process; one has to be completely undeterred in his zeal to complete the project.

Any tips on writing that you would like to pass on to young, aspiring writers?

There is only one way, and that’s Hemming-way. Well, I don’t know how far it’s true, but Ernest Hemingway once said: “Write drunk, edit sober”. Not necessary I follow that, but just saying since I heard it a few times in the Bangalore literature fest last season.

I guess a lot of aspiring writers find it difficult imagining how to compromise on patience. It’s paramount to be extremely patient in the entire process. Also how you write is a major factor. Some people prefer writing on a word processor. I have heard the likes of Ashwin Sanghi mentioning comfortability is another factor and he used to write in a spreadsheet. I personally prefer the old school way, which is ink on paper & then finally feed it to a word processor and edit.

Editing is another factor. I edited my manuscript eight times and then my editor followed up with 4 more. So 12 is the final number. Most aspiring writers feel this is a tedious process, but it’s very important to edit and pass it on for proofreads.

I would like to thanks my younger brother Anubhav and my wife Priyanka for the huge help around proofreading my manuscript.

Your top 5 favourite books.  The books that inspired you to write your first novel.

There are a certain genres that excite me. Interestingly, I don’t read much of historical fiction even though I ended up writing one. I prefer Classic’s, Mystery, Detective Thrillers, Fantasy (extremely choosy in this zone) and Whodunits.

My top five would be:

The Fishermen by Chigozie Obioma, who happens to be my ex- rommie back in my college days was an inspiration. But I have read a few short stories of his which blew my mind and it definitely encouraged me to even dream about writing in the first place.

One of his short stories “The Well”, I would definitely put it up there amongst the Legends of Manto, Chugtai and Keki N Daruwalla.

RL Stevenson’s “Treasure Island” is a book I guess a lot had read and chewed multiple times, so did I.

What lies ahead? Any new project? What are you currently working on?

I believe in concept writing. My Books will always have a singular theme to it, based on the Dream Theory. Currently, I am working in parallel on two projects. One is being editing and the other is at a rather early stage. My next two projects would be till and extent local with a global connection.

The main idea is to promote untold and forgotten stories from the Northeast India to the larger mass in the global landscape. I hope my works reflect well and leave a lasting impression on what it stands for.