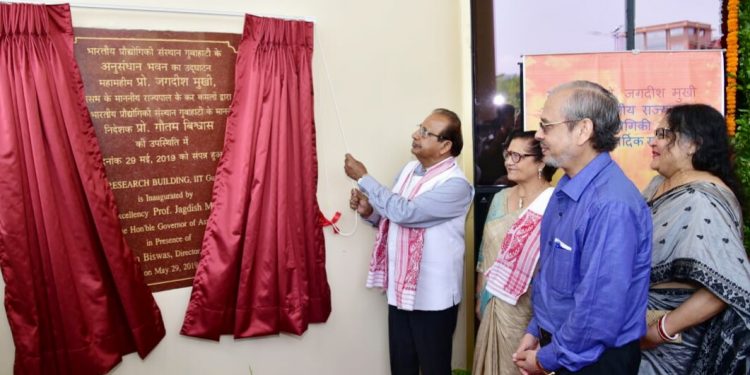 Assam Governor Prof Jagdish Mukhi said that nanotechnology which is a field of future has opened vistas for newer and newer medical avenues for the welfare of mankind.

He further said to achieve this distinctive profile, the Indian Institutes of Technology (IITs) have to play their crucial role and the brilliant students of IIT should take proactive role in dedicating themselves for this great vision of transforming the nation with the help of Nanotechnology.

While inaugurating a new academic complex and research and development building of IIT-Guwahati (IIT-G)at its campus at North Guwahati on Wednesday, Prof Mukhi said that he is happy of the fact that IIT-Guwahati has been empowering the students with quality technological knowledge, skill and ability to help them inculcate the right attitude and holistic values.

He further said that the research and development activities always play a pivotal role in shaping up a nation’s progress especially in the realms of science and technology and urged the IIT-Guwahati fraternity to use its wisdom and expertise for the extensive application of research and technology like nanotechnology to lead mankind to the path of wellbeing.

Prof Mukhi also said that the IITs are blessed with enthusiastic and energetic students who have the potential to bring about total transformation in the society.

The Governor pointed out that there are certain areas where thrust needs to be given to achieve a better transformation which are: reliable and quality electric power, surface transport and infrastructure, education and healthcare, Information and communication technology, agriculture and food processing and self-reliance in critical technology. He also said that these five areas are closely interrelated and if harnessed in a proper way, will lead to tremendous progress in the fields of economics, food and national security.

Prof Mukhi also emphasized that entrepreneurship is another thrust area where the IITs and their brilliant students must foray to create employment avenues both directly and indirectly.

Referring to the need of better placement for the students, the Governor said that  placement wings of IIT have a special role to play in highlighting the success stories of the alumni so that the coming generation get enthused and also draw their inspiration. A constant interaction of the IIT with venture capital institutions in the primary, secondary and tertiary sectors is also very important.

The Governor also observed that the IIT-Guwahati curriculum should lead market research support and make the entrepreneurs in selecting the right products. A hand holding by Institute in tandem with such microfinance organisation during the incubation period can be one of the major thrust areas to make entrepreneurial venture a success. After dedicating the two buildings, Prof Mukhi hoped that the facilities will help the students to further enhance their academic performance of the students.