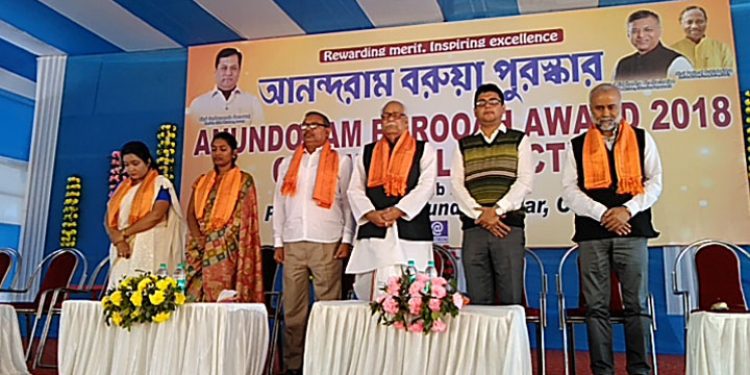 Former union minister Kabindra Purkayastha and MLA Dilip Kr Paul along with others observing one minute's silence for the death of CRPF jawans in Kashmir at the Anundoram Borooah award presentation function in Silchar. Image - Northeast Now

Along with rest of the state, 779 students from seven Assembly constituencies of Cachar district received laptops as part of the Anundoram Borooah Award in a function organized at Silchar’s police ground on Friday.

Out of the total recipients of the award, 234 students have achieved ‘distinction’ while 545 students have secured star marks in the HSLC examination for 2018 conducted by the Board of Secondary Education Assam (SEBA).

One-minute silence was also observed to mourn the death of CRPF jawans in Pulwama district of Jammu & Kashmir on Thursday last.

Speaking on the occasion, Dilip Kumar Paul in his address said, “We have lost sons of our soil. I on behalf of my people would appeal to our Prime Minister to take stern action against Pakistan so that no such act is repeated again.”

On the issue of awarding students with laptops which began in 2005, Dilip Kumar Paul said, “The previous government has done one good work, but with a lot of mismanagement in the distribution. We all know how they have purchased laptops half the price and distributed it to the students.”

Basanta Bothakur, manager at Assam Electronics Development Corporation Limited (AMTRON), which is the nodal agency for distributing laptops to the students, in his address, said, “All these laptops have been tested by experts of IIT Guwahati. These laptops come with a dongle for two years of use.”

“Not only that, study materials for Class XI and XII also come with it for all the students to use it wherever they go. These laptops also have tutorials for cracking entrance tests for engineering and medical courses,” said, Basanta Borthakur.

Deputy commissioner Maddhuri summed up the purpose of such awards by saying, “The next few years for the students are very crucial. Every student must understand that if they work hard for the next five to seven years, they can shape their future for eternity.”