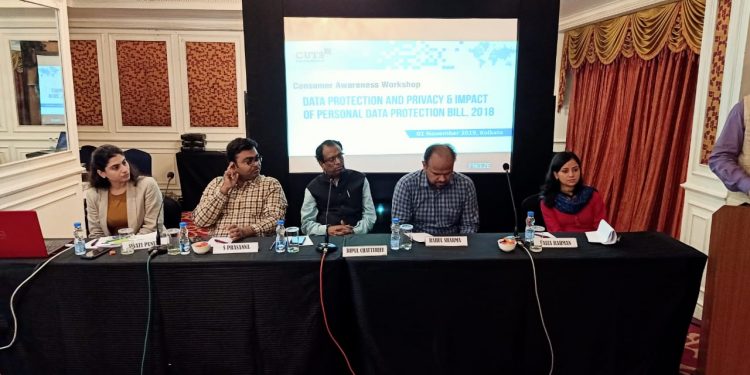 The workshop intended to engage with key local stakeholders from north-east and east India in order to build their capacity to further engage with citizens and policy makers productively on the issues of privacy and data protection, and to also help consumers’ put forth their perspective.

Several stakeholders participated in the discussion, including policy influencers, academia, consumer organisations, think tanks, and media, among others.Bipul Chatterjee, Executive Director CUTS International, highlighted the role of citizens in enhancing privacy and protecting their personal data. Further, he mentioned that the key objective of this workshop is to deconstruct the concepts around privacy and data protection for a common man in order to enable his engagement in the debates surrounding the issue.

Swati Punia, Assistant Policy Analyst, CUTS International, mentioned that increasingly vulnerable groups are coming within the fold of digital economy and therefore having a data protection that protects their privacy is need of the hour.

Faiza Ahmed, Research Fellow, National Institute of Public Finance and Policy (NIPFP), underlined the value of users consent and the need for getting prior consent from the citizens before using personal data/information. She pointed out that while many companies/applications get consent from the consumers but more than often, the users provide their consent without understanding the legalities of the clauses – reasons being the complex languages and the sheer size of the agreements.Rahul Sharma, Country Leader, International Association of Privacy Professionals (IAPP) mentioned that India moving towards becoming a $5 trillion economy and envisages $1 trillion to come from the digital economy.

Data is perceived akin gold. But India is lacking data protection and privacy laws. He explained the need to be responsible while sharing personal data and rights that can be exercised to protect personal data. Prasanna, an advocate with The Supreme Court of India and a constitutional expert pointed that data is not a public good, it is a private right. Further, he mentioned that the state needs to be better than the private entities, and it needs to build itself into a ‘model data collector’.

The workshop highlighted the issues related to data leaks, data breaches, and surveillance. CUTS also presented findings of their user perception survey covering 2,160 respondents across six states in India on usage of digital technologies by consumers. The consumers expect service providers to use consumer data only for the purposes it was collected, uphold privacy and practice anonymization. Reputation is key in providing confidence to consumers for sharing their data. Thus, any unfair attempt to use consumer data without following due process, may breach the trust consumers have on service providers.

Recently, many developments have been made on the front of securing data and informational privacy of the Indian citizens. There is a dire need to raise awareness and build capacity of consumers, particularly in tier-II locations, considering they are increasingly coming within the fold of the digital ecosystem concluded Swati Punia, Assistant Policy Analyst, CUTS who conducted the two-day workshop. Awareness workshops such as these, would help consumers safely navigate the digital ecosystem.

Representatives of various consumer and civil society organizations voiced their concerns and perspectives during the workshop.