About 60 city-goers from different walks of life joined hands to mix the dry fruits with whiskey, rum and wines 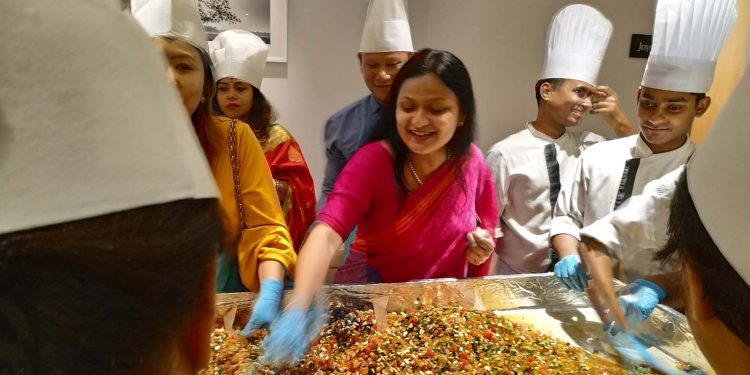 Christmas is no fun without cake.

So, with barely two months to Christmas, Vivanta by Taj in Guwahati on Friday organized a cake mixing ceremony to add to the festive season.

About 60 city-goers from different walks of life joined hands to mix the dry fruits with whiskey, rum and wines.

The mixture will be kept in an airtight container for fermentation only to be used on December 23 for making the traditional plum cakes for Christmas.

“It is a traditional cake mixing ceremony we are doing at Vivanta Guwahati today,” said chef Sumalya Sarkar.

“We are pouring whiskey, brandy, wine and dark rum and some traditional spices with the fruits.”

“We will open it on December 23 to make our cakes for the Christmas this year,” Sarkar added.

Ashwani Anand, general manager of Taj Vivanta said, “It is not only a cake mixing ceremony.”

“The occasion is celebrated as we also mix good wishes from the people so that the Christmas bring more happiness and joy,” added Anand.

The cake mixing ceremony is a centuries old tradition celebrated across the world.

The mixing of the fruits with liquor well in advance develops the required aroma and taste in the mixture.

Originally a family affair, the cake mixing ceremony has over the years become a celebrity affair celebrated across the world.