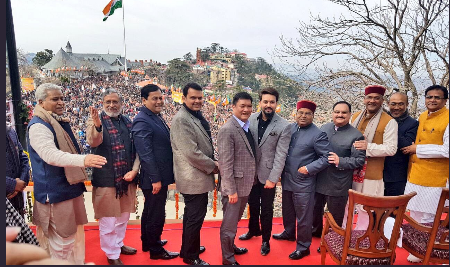 Assam CM along with CMs of other BJP ruled states during the swearing-ceremony.

Governor Acharya Dev Vrat administered the oath of office to the Chief Minister and 11 other Ministers in the presence of Prime Minister Narendra Modi, BJP president Amit Shah and a large number of senior party leaders and Union Cabinet Ministers including L.K. Advani, Rajnath Singh and Nitin Gadkari. Chief Ministers of many BJP-ruled States were also present.

“Congratulations to the new CM and his team,” he tweeted.