Donald Trump has been suspended from Twitter after tweeting to supporters who attacked the US Capitol. 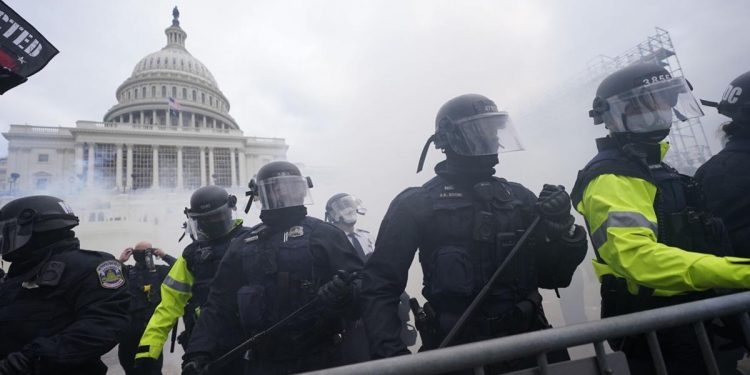 Capitol Hill houses the US Senate and House of Representatives.

ANARCHY INSIDE THE CAPITOL BUILDING pic.twitter.com/1AuuLWPhyh

SCENE OUTSIDE THE CAPITOL BUILDING pic.twitter.com/vBh4JqzTRy

A woman Trump supporter was also shot by the officers on duty as violent clashes broke out between President Donald Trump’s supporters and the police. The woman later died.

Three other people have died in ‘medical emergencies’.

The ‘siege’ unfolded at a time when US House of Representatives and Senate met in a joint session to certify Joe Biden as President-Elect.

Police personnel on duty put up a resistance by firing pepper spray into the crowd to keep them back, even as the crowd shouted, ‘traitors’.

Soon, the violence moved inside the Capitol building.

Members of Congress – including Vice-President-elect Kamala Harris – were told to evacuate the building or remain where they were.

Meanwhile, the Washington DC Metropolitan Police informed that at least 52 persons have been arrested so far.

On the other hand, the Joint Session of Congress to certify the election of Joe Biden has gone into an unexpected recess.

The Capitol building has been place under lockdown, after Trump supporters breached security lines.

Meanwhile, according to reports broadcasted in US news channels, members of President Donald Trump’s cabinet discussed possible removal of Trump from office after his supporters stormed the Capitol.

The discussions focused on the 25th amendment to the US Constitution, which allows for a president’s removal by the vice president and cabinet if he is judged “unable to discharge the powers and duties of his office”.

Meanwhile, condemnations have started to pour in from across the globe.

“The United States stands for democracy around the world and it is now vital that there should be a peaceful and orderly transfer of power,” the British PM said.

Disgraceful scenes in U.S. Congress. The United States stands for democracy around the world and it is now vital that there should be a peaceful and orderly transfer of power.

Scotland’s First Minister Nicola Sturgeon tweeted that the scenes from the Capitol were “utterly horrifying”.

The scenes from the Capitol are utterly horrifying. Solidarity with those in ?? on the side of democracy and the peaceful and constitutional transfer of power. Shame on those who have incited this attack on democracy.

European Council President Charles Michel said he trusted the US “to ensure a peaceful transfer of power” to Joe Biden.

The US Congress is a temple of democracy.

To witness tonight’s scenes in #WashingtonDC is a shock.

Donald Trump has been suspended from Twitter after tweeting to supporters who attacked the US Capitol.

In a series of tweets he told the protesters “I love you” before telling them to go home. He also repeated false claims about election fraud.

Twitter said it required the removal of three tweets for “severe violations of our Civic Integrity policy”.

The company said the president’s account would remain locked for good if the tweets were not removed.

It went on to say that “Future violations of the Twitter Rules… will result in permanent suspension of the @realDonaldTrump account”.

It means Donald Trump’s days on Twitter could be numbered. The president is not known for paying much attention to Twitter’s community guidelines.

Facebook said, “We removed it because on balance we believe it contributes to rather than diminishes the risk of ongoing violence.”