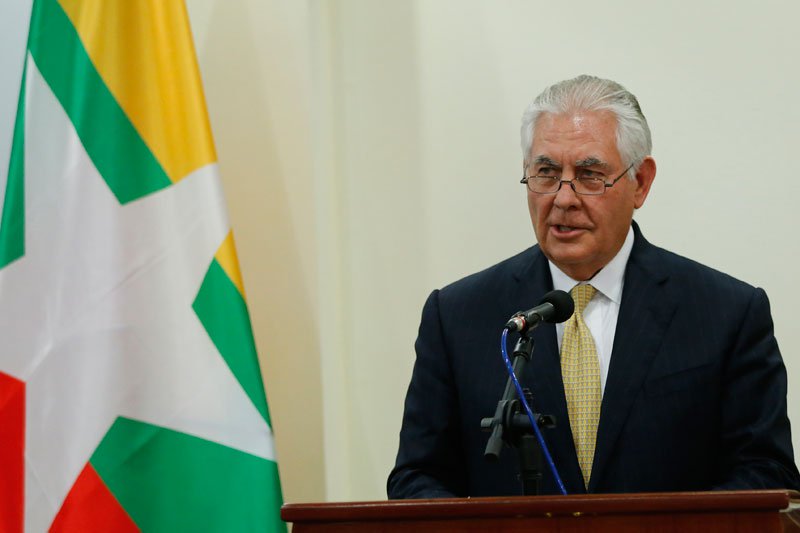 US Secretary of State Rex Tillerson speaks to the media during a joint press conference with Myanmar State Counsellor Aung San Suu Kyi (not pictured) after their meeting at the Ministry of Foreign Affairs in Naypyitaw, Myanmar. Photo: EPA-EFE

The United States on Wednesday toughened its stance on Myanmar, accusing the country’s security forces of perpetrating “horrendous atrocities” against the Rohingya that amount to “ethnic cleansing” of the Muslim minority.

The statement from Secretary of State Rex Tillerson, who visited Myanmar last week, is the strongest US condemnation yet of the military’s crackdown against the Rohingya, which has triggered a major refugee crisis and escalating global outrage.

“After a careful and thorough analysis of available facts, it is clear that the situation in northern Rakhine state constitutes ethnic cleansing against the Rohingya,” Tillerson said in a statement.

“No provocation can justify the horrendous atrocities that have ensued.”

More than 600,000 Rohingya have fled mainly Buddhist Myanmar for Bangladesh since the military launched a counter-insurgency operation in troubled Rakhine state in late August.

While the army insists it has only targeted Rohingya terrorists, refugees massing in Bangladeshi camps have given chilling and consistent accounts of widespread murder, rape and arson at the hands of security forces and Buddhist mobs.

“These abuses by some among the Burmese military, security forces, and local vigilantes have caused tremendous suffering and forced hundreds of thousands of men, women, and children to flee their homes,” Tillerson said.

Myanmar’s response to the crisis will be vital to determining the success of its transition to becoming “a more democratic society,” he added.