Telangana woman rides 1,400 km on her scooty to bring her son back home 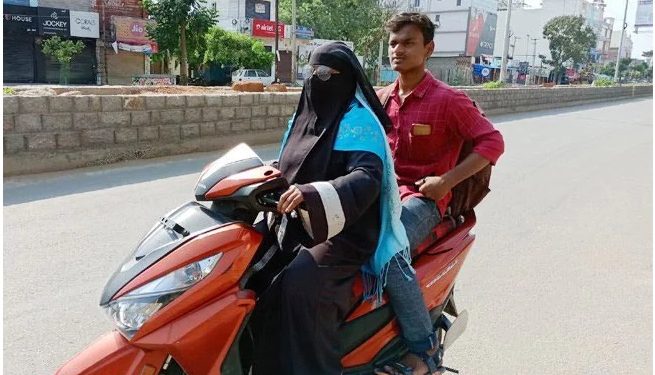 Razia Begum rode on her scooty for nearly 1400 km from Telangana to bring back her 19-year-old son from Nellore.

A 48-year-old woman in Telangana rode on a scooty for three days for bringing her son back home amid the nationwide lockdown.

As per reports, Razia Begum rode on her scooty for nearly 1400 km from Telangana to bring back her 19-year-old son from Nellore.

Her son Nizamuddin had gone to Rahamatabad in Nellore on March 12 to drop his friend and stayed back there.

After the nationwide lockdown was announced, Nizamuddin could not come back to his home and called for his mother’s help.

Hearing from her son who was desperate to return home, Razia’s motherly love, courage and determination prompted her to bring him back using her two-wheeler.

Although the mother-of-two decided to send her elder son first to bring back his younger brother, she later decided against the idea since she feared police might mistake him for a joy rider and detain him.

After discarding the idea of taking a car for bringing her son back, Razia later choose her scooter and set out from her home on April 6 armed with local police permission.

She reached Nellore the next day afternoon and left for home town on the same day along with her son and reached Bodhan on Wednesday evening.

Razia, who is a headmistress of a government school,  had taken chappatis for her long journey making stops at fuel stations and quenching her thirst at certain points along the way.