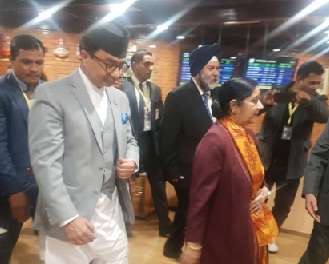 External Affairs Minister of India Sushma Swaraj has arrived in Kathmandu on a two-day official visit to Nepal on Thursday, The Kathmandu Post has reported.

According to the newspaper she will first hold a meeting with CPN-UML Chairman KP Sharma Oli, Prime Minister in-waiting, during her visit to Nepal.

It has been learnt that Sushma Swaraj will convey the “special political message” of Indian Prime Minister Narendra Modi, who has already expressed his readiness to work with the new government, to KP Sharma Oli.

After meeting Oli, Swaraj is scheduled to hold a meeting with the presidium members of the Rastriya Janata Party Nepal.

Before returning to New Delhi, she will pay a courtesy call on President Bidya Devi Bhandari.

This is Minister Swaraj’s 7th visit to Nepal since assuming office in May 2014.

The Ministry of External Affairs of India through an official press statement on January 29 had said that the visit is in keeping with the tradition of regular high-level political exchanges between India and Nepal, and reflects the expanding bilateral partnership and the importance that the two countries attach to further strengthening it across diverse sectors.

“The visit will provide an opportunity to hold discussions with political leaders of Nepal on issues of mutual interest, and to advance age-old special bond of friendship between India and Nepal,” the statement said.

This is her 7th visit to Nepal since assuming the office in May 2014 affirming close bonds of friendship between our two countries.