No proposal to ban use of Zoom App: Centre tells Lok Sabha

There is no proposal with the Union ministry of electronics and information technology to ban use of Zoom App, the Lok Sabha was told by the Centre on Wednesday.

The government was questioned in the Lok Sabha “whether the government has taken any decision to ban the use of Zoom App as it is posing seems security problems”.

In a written reply to the question, Union minister of state for electronics & IT, Sanjay Dhotre said: “The Indian Computer Emergency response Team (CERT-In) has issued a number of advisories on the safe and secure usage of video conferencing tools including Zoom App.”

“There is no proposal with Ministry of Electronics and Information Technology to ban use of Zoom App,” the Union minister clearly mentioned in his reply. 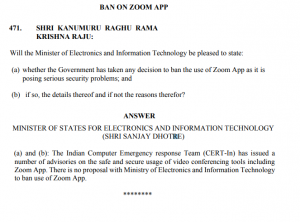 The ban on 224 Chinese-owned apps was brought up in at least five different questions in Lok Sabha on Wednesday a number of different ways, said a media report.

In at least three written answers, IT Minister of State Sanjay Dhotre, refused to name any country “in public domain” citing national security concerns when asked if all the apps where made Chinese companies.

The minister, according to the report, said the ministry also does not have any information about the number of jobs lost or the financial cost of banning these 224 apps.

This challenge, to promote existing Indian apps, and help in the development of new apps, was launched a mere week after the first set of 59 apps was banned.

Dhotre mentioned that 6,940 applications were received in this challenge, a fact that had been released by the government earlier as well.

The Indian government blocked access to 59 Chine apps, including TikTok, WeChat, Shein, Clash of Kings due to security reasons amid border tensions between India and China in Ladakh.