The Kung Fu Nuns of Nepal have started an expedition to cover more than 3,000 km on bicycles to raise awareness for the rising human trafficking issue in South Asia.

More than 400 Buddhist nuns are part of the expedition and were inspired by UN’s Honoree His Holiness Gyalwang Drukpa, the spiritual leader of the Drukpa lineage of Buddhism, who is also riding alongside the Kung Fu Nuns.

Trained in martial arts, the expedition will be their 5th trip across the region. Last year, the Cycle Yatra spanned several months and made major waves at each stop.

Continuing their work, the group has spawned a progressive generation of Buddhist activism across the Himalayas. 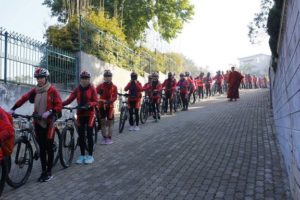 “We believe we are returning to our true spiritual roots by championing gender equality, physical fitness, environmentally-friendly ways of living, and respect for all living beings,” one of the nuns said. They began learning Kung Fu for self-defense and for building inner and outer strength, and staying strong, and working hard for others is their dictum.

Most of the nuns are from the Himalayas, a culturally diverse mountain range that stretches throughout Asia. Most of them stay and train at Druk Amitabha Mountain Nunnery in Nepal. Each of them has a unique story, and we all share the common belief that they are here to help others.

In 2015, Nepal was struck with by a terrible 7.9 earthquake. With the support from an international non-profit called Live to Love, the Fung Fu nuns were some of the first relief workers on the ground to distribute aid, which they initially took on foot to villages. Later, they were able to do a medical helicopter rescue, truck rescues, food and medicine distribution, provide solar power, and more.

In 2012, the nuns were invited to perform Kung Fu at Olympic Park before the Olympics in London. Since then, they have performed in many places for thousands of people. They train very intensely, and hope to encourage other people to be confident and strong.