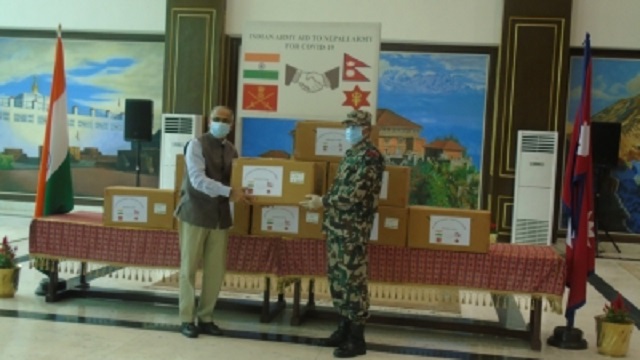 India has handed over medical equipment worth Nepali Rupees 28.80 crore (Rs 280 million) to the Nepali Army in Kathmandu.

Ambassador of India to Nepal, Vinay Mohan Kwatra handed over the equipment to Nepali Army on Friday as part of the ‘Neighborhood First’ policy.

Kwatra reaffirmed India’s support to Nepali Army in its fight against the Covid-19 pandemic and lauded its contribution in this respect, the Embassy said, adding that the latest assistance is another testament to the close cooperation between the two armies and the two countries, particularly in times of need.

The Indian Army has been assisting the Nepali Army to fight Covid-19 through various kinds of help since last year, including the donation of one lakh doses of the Covishield vaccine, which were provided in March this year.

The armed forces of the two neighboring countries share fraternal relations for decades where chiefs of both the armies are respective honorary chiefs of Nepali and Indian armies.

Most of the time, Nepali Army procures its military and other logistical support and needs, including both lethal and non-lethal, from the Indian Army.