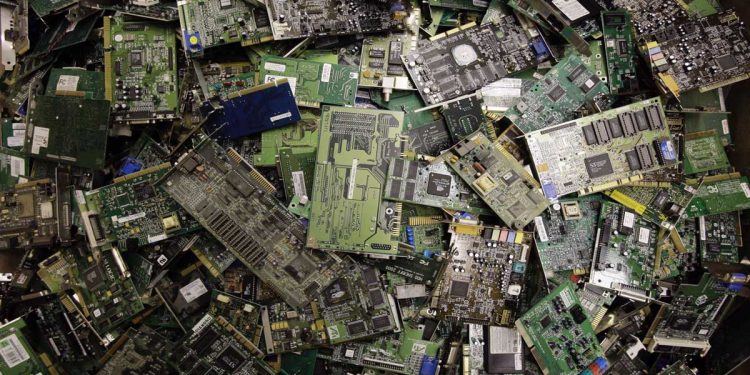 According to a study by the United Nations University (UNU), it has been estimated that the global e-waste will increase by 38 per cent by 2030.

In 2019, there was a generation of 53.6 million tonnes (MT) e-waste globally, which is an increase of almost 21 per cent in just five years.

Asia was followed by the two American continents and the jointly they generated 13.1 MT of e-waste.

The study revealed that in 2019, the majority of e-waste consisted of 17.4 MT of small equipment and 13.1 MT of large equipment along with temperature exchange equipment of 10.8 MT.

According to the UNU study, screens and monitors, lamps, small IT and telecommunication equipment represented 6.7 MT, 4.7 MT, and 0.9 M respectively.

It may be mentioned here that such wastes are hazardous to both for the health and environment as it contains toxic additives like mercury- which damages the human brain and/or coordination system.

Such wastes cannot be recycled at all and even if it is recycled, then only a small amount of it can be recycled.

The UNU study revealed that in 2019 less than 18 per cent of the e-waste generated could be collected and recycled,

In its report, the UNU further stated, “E-waste consisting of gold, silver, copper, platinum and other high-value, recoverable materials worth at least $57 billion was mostly dumped or burned rather than being collected for treatment and reuse.”

Several countries across the world have understood the threat and the danger such waste can possess and hence around 61 to 78 nations (including India) have adopted a national e-waste policy, legislation or regulation.

It’s worth mentioning here that India has 312 authorised recyclers for such waste and they have the capacity for treating approximately 800 kilotonnes of e-waste annually.

But the formal recycling capacity remains underutilised, as the large majority of the waste is still handled by the informal sector.

About 90 per cent of India’s e-waste is recycled in the informal sector, the UNU report added.