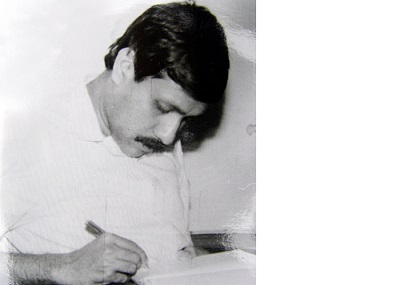 Parag Kumar Das, a former Editor of 'Asomiya Pratidin', an Assamese daily, who was killed by miscreants, in front of a school in Guwahati. Photo source - Internet

About a decade ago, in front of a school in the middle of the city of Guwahati, around noon, one parent in his late thirties was there to pick up his son. The man was fired upon indiscriminately with automatic weapons by assassins in front of hundreds of children of the school and he met his bloody death immediately. His crime was that he was an honest and bold journalist! That brutal incident had stunned the State and the journalist fraternity of the State expresses regret as the culprit of the incident could not been convicted.

Such incidents are not untypical of the milieu for those who were born in the seventies and were either child or youth during the subsequent decades. Those were the decades of turmoil where for many the objective was to survive somehow till the next day. In an atmosphere of fear, the dreams – both individual and social – were shattered for many. If someone of the present young generation wants to revisit those horrible time of the late eighties and nineties of the last century, then he or she will definitely realize a kind of enduring social disorder and panic state of affairs prevailed during that phase which made disastrous impact on the socio-cultural milieu of then Assam.

A recent study by an American university has revealed many important aspects of the young and juvenile responses to the violence. This study has examined how such an atmosphere impacts the thought patterns of those children who had first hand experienced the trauma of seeing such violence. However, in those uncertain decades, most of the Assamese youths had to experience all kind of violence, conflicts and terror – both of insurgent groups as well as of the counter-insurgency forces. Many girls faced shame, many boys had to witness that or even direct assault if daring to protest.

Human rights were trampled with impunity by all who possessed brute power. How did such an atmosphere impact the youth of those years? What were the traumatic effects? What were the ill effects that still haunt their minds? Unfortunately, these issues are hardly discussed in media or there is very little research or study in this broad area. It is s not only the youths born in the seventies and eighties found themselves to be unfortunate; those born in the subsequent decade to grow up in the environment of endless social and political conflicts, violent ethnic clashes subject to crises of identity resulting in rise of violence, addiction to alcohol and drugs in almost every sphere of their lives.

In addition, there was a very cynical and utterly selfish class of leadership in form of government officials and politicians that they encountered. The children and youth growing up in this milieu experienced such a society where a formidable section was mentally and physically devastated in the spirals of murderous violence while another specialized the art of getting money and amassing wealth through all exploitive means. The society remained silent to the fact that the growing children require a healthy social atmosphere, the seniors trying to inculcate human values for the young ones. Those exceptional voices who had shown their concerns were silence in manners most brutal.

In such context where the social order of the society has disintegrated to a larger extent in every sphere, the task before the youth of this country and particularly the youth of the Northeastern region of the country are to engage themselves in civic and collective endeavours. Long back in 1941, an American sociologist Paul H Handy had identified the challenges in transition to youth to adulthood as – Mature economically, mature socially and mature in marital relations. The question, for us, is for those who grew up in perpetual fear and in a society decadent economically, politically and socially, how will those young men and women will transform themselves into adulthood? And what dreams they will dear to have about their transition to adulthood!

Therefore, the youth of the country, predominantly those who have already attained the age above 16 should understand the societal, economic and cultural context of this country and make their endeavour to promote those promises that are transparently uttered in the Constitution of this country. The plurality, that have been practising in this country in every discourse, should be respected  by these youth and instead of dreaming for personal gain and carrier the youth of this country should have the ability as well as aspiration of collective doing and responsibilities.

Again this task of attaining maturity as well as understanding of socio-cultural fabric of society and the responsibility towards building of an uneven society can’t be expected from the young generation without the active participation of the State machinery. If the state is deviating from its prescribed constitutional promises and obligations and taking a course that totally differs from the mandated socio-political and economic commitment, then obviously the present young will have to mould their life ignoring all kind of loyalty towards society and the state. Before we insist our young generation to come forward for build up the nation, it is the primary duty of the state to uphold the constitutional promises without any compromises which aspires the citizen of this country to carry out their obligations.