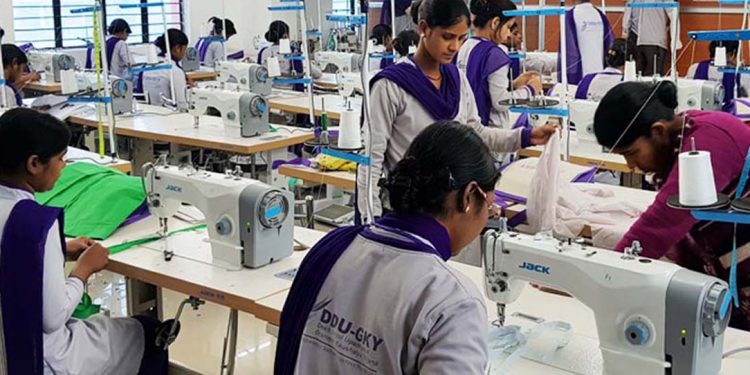 Assam is endowed with many natural, mineral and other resources but one important issue is unemployment.

According to a survey, conducted by the Centre for Monitoring Indian Economy (CMIE), Assam’s unemployment rate hit a 19-month high of 11.1% in April 2020.

All rational youths for their survival and to lead happy lives want employment.  And the employments are of two types– self-employment and wage employment.

In India, two major employment programmes for rural youths are – RSETI and DDUGKY.  RSETIs mean Rural Self Employment Training Institutes, an initiative of the Ministry of Rural Development (MoRD) to have dedicated infrastructure in each district of the country to impart training and skill upgradation of rural youth geared towards entrepreneurship development.

And the Deen Dayal Upadhyaya Grameen Kaushalya Yojana (DDU-GKY) was launched on September 25, 2014 with the dual objectives of adding diversity to the incomes of rural poor families and caters to the career aspirations of rural youth.

DDU-GKY: Few Salient Features:: DDU-GKY is exclusively focused on rural youth between the ages of 15 and 35 years from Below Poverty Line (BPL) families.

The statistics reveal more than 180 million or 69% of the country’s youth population between the ages of 18 and 34 years, live in its rural areas of India. Of them, the youth from poor families with no or marginal employment were about 55 million.

It is pertinent to mention that the National Policy for Skill Development & Entrepreneurship 2015 has identified a skills- gap of 109.73 million in 24 key sectors by the year 2022.  This number cannot be achieved without addressing 55 million from rural India who are from the BPL families.

Also, a FICCI and Ernst – Young study published in 2013 identified a shortage of over 47 million skilled workers across the globe by 2020. This presents an unprecedented opportunity for India to train its poor youth population and place them in jobs across the world and realize its demographic dividend.

There are no placement charges. So, rural youths should take the full advantage of DDU-GKY and youths should know that no one is doing a favour to them by recommending his/her name for training.

DDU-GKY is in implementation in 28 states and UTs, across 689 districts, impacting youth from over 7,426 blocks. It presently has more than 1,575 projects being implemented by over 717 partners, in more than 502 trades from 50 industrial sectors.

The data reveals that till March 2022, the cumulative target of youths to be trained are little more than 28.9 Lakh and I request the Union Government and all the state governments utmost action should be taken to achieve the target and placement should also go up.

After COVID19 pandemic, a lot of youths have lost jobs so through DDU-GKY if employment is created many will get jobs and the economy will develop because of the ‘Multiplier Effect’.

By carrying out research study actual reasons can be understood why trained youth was less than target and after training why 56% youths were placed. It may be mentioned that sometimes some youths are not interested to work as wage earners instead prefer to start self-employment and also girls after marriage may not continue to work so by carrying the study details can be identified.

DDU-GKY has huge scope in Assam as many youths join in different parts of India including Southern part of India as security personnel. I know in one housing society comprising around 190 Villas in Hyderabad, 11Assamese youths from the Brahmaputra valley of Assam work and on an average each gets Rs12,000 per month.

I suggest to the district officials of Assam to popularise DDU-GKY through massive campaign/propaganda so that rural youths can be aware and take the advantage of DDU-GKY.