Leave alone the unorganised sector, countless number of business houses in the private sector branded as 'organised' in Assam are known for their unbounded economic exploitation of the employees 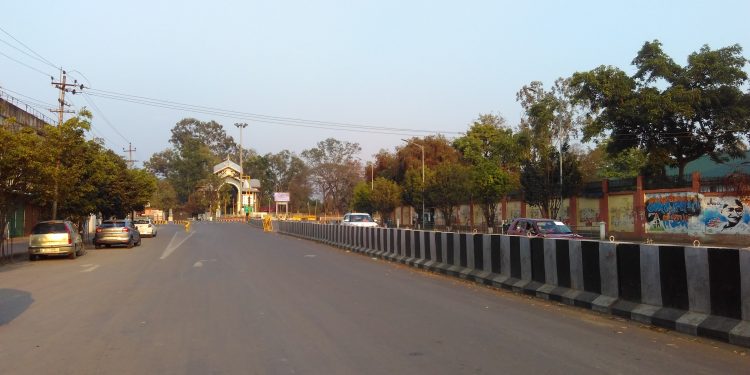 A view of a street in Imphal during lockdown. Image: Northeast Now

In Assam too, the economic slowdown unfolded across the state in its own way and in accordance with the local conditions. The private sector, a portion of which wears the tag of ‘organised’ sector, is overwhelmingly unorganised right from the word go.

Leave alone the unorganised sector, countless number of business houses in the private sector branded as ‘organised’ in Assam are known for their unbounded economic exploitation of the employees/workers.

Not to speak of even a semblance of job security, matters like issuance of appointment letters even on a temporary basis to the employees, Employees’ Provident Fund, EMI, ID cards and the like are unknown in such ‘organised’ arena of the private sector. Pay cuts of employees/workers are a routine feature of such ‘organised’ sectors.

While employees/workers are, almost as a rule, made to work an hour or two or even more beyond the prescribed working hours everyday, pay cut is the order of the day if an employee/worker reports for duty even by five or ten minutes because of various hazards like traffic jam on the way.

In one word the approach adopted by the employers of such business units is draconian in the superlative degree with the staff at the receiving end. Even some print media houses come under such category while the Majithia Wage Board recommendations are dumped in the dustbin, courtesy the state government.

Now that the lockdown is on, it is not quite apprehensible as to what would become of the employees/workers after the lockdown is lifted. Having tasted the pangs of savagery in hell-like envorons laid out by the employers at such business units and having had mustered the guts to squarely confront the toughest of challenges during the lockdown, it may not be surprising if many of such exploited employees/workers do not return to their place of work.

While the lockdown came into force on March 24, based on erratic payments made to them by their atrocious employers, many of the staff of such business units may have already drawn the conclusion that the pay for the first 23 days of March is possibly as good as lost.

Not that any new place of work may be rosy for the employees/workers, particularly in the aftermath of the economic stagnation during the lockdown. Again, the strength of staff in many of the business units in the private sector may run into nil or almost nil.

To get their business going such units may try to woo workers with mountains of promises and job security. However, on this count many of the jobless workers may turn out to be clever enough not to fall into the vicious grip of such employers who have a record of economic exploitation of the staff for decades together.

On the other hand, some business units in the private sector known for abiding by at least a minimum of provisions laid down by the law in favour of the working class, may not be able to retain the existing staff or may have to run with a skeletal staff due to acute cash crunch faced by the employers.

Similarly, the construction sector may come to a grinding halt with vast majority of the workers likely to stay back at home at least for the time being.

Thus, loss of job, triggering quantum leap in unemployment, is almost sure to manifest itself in the most alarming manner in the post-lockdown period in Assam as in the rest of the country.

Further, economically speaking, while the lockdown has impacted every walk of life in the most brutal way, the acute unemployment scenario and virtual closure of income eking avenues, may lead to a massive spurt of crimes across the state as the post-lockdown period unfolds.

An era of crimes for ‘food, shelter & clothing’ may even come to stay. Nay, God forbid, we may witness an era where crimes come to stay as the order of the day.