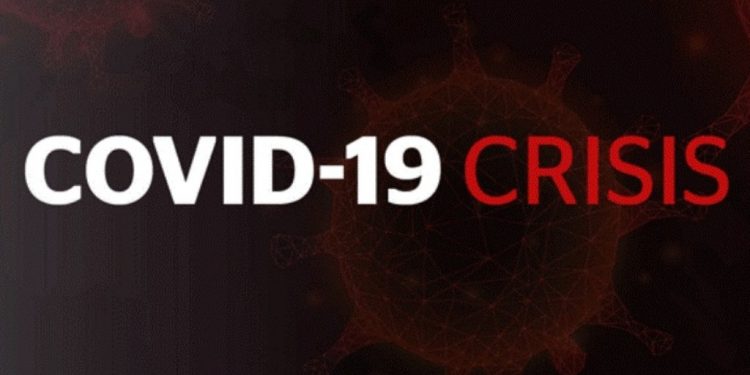 COVID-19 caused by the infection of Novel Coronavirus (nCOV), which was first reported in Wuhan city of central China on December 8, 2019 as a SARS-like pneumonia, started spreading soon to most parts of the world. In view of its fast growth and worldwide spread through human to human transmission, WHO declared COVID-19 as a Pandemic on March 11, 2020, when the number of infected cases and death toll in the world reached 1, 26,214 and 4,628 respectively as against the corresponding figures of as high as 80,793 and 3,169 alone in China.

But very soon the situation had gone almost out of control in the western world, and thereby Western Europe became new epicentre of nCOV on March 13 and USA on March 27 with number of cases crossing 1 lakh. In this way 2019-2020 COVID-19 turns out to be historically unprecedented with respect to its worldwide spread by infecting several millions and killing several lakhs of people in more than 213 countries and territories.

So far the situation of COVID-19 in India is concerned, it first surfaced on January 30 in a person of Kerala and another two on February 2, who shortly came from Wuhan.

Subsequently, few more persons who had come from Italy, UAE, Iran and USA also reported positive in Rajasthan, Delhi, Telangana, Uttar Pradesh, Karnataka and Maharashtra, and these cases in due course started multiplying. For the purpose of breaking the chain of transmission of the virus and to see the preparedness of countrymen Prime Minister called for 14-hour Janata Curfew in India on March 22.

Meanwhile, movement of all international flights from March 22, and domestic flights, trains and buses from March 24 has been suspended in the country. The toughest decision of total lockdown of the country was announced for three weeks starting from mid-night of March 25, the day when the number of infections and deaths in the country reached 571 and 10 respectively. With a view to save the country and its people from impending health catastrophe Centre announced observance of several measures like isolation of infected cases, quarantine of the suspected cases, social distancing, facial masking, and maintenance of hygiene including frequent hand-wash and sanitization.

Although there has been contrasting global views regarding life and livelihood in the context of lockdown, declaration of nationwide lockdown by the Prime Minister was based on the view of “Jaan hai to jahan hai”. When we look at the trend of nCOV infection and death toll in the country, it appears that the lockdown kept the growth quite slow and under control in the initial stage.

Moreover, most importantly, the initial nationwide lockdown provided time for healthcare infrastructure development and evolving strategies to fight nCOV in a planned way in most parts of the country. However, during the first phase of lockdown itself when the number of infections and deaths were as small as 1,635 and 47 respectively till March 31, it increased alarmingly to 1,90,648 and 5,405 on  May 31 (end of lockdown-4); and 5,85,792 and 17,409 on  June 30 (end of unlock-1).

The state of Maharashtra, which emerged as the largest hot-spot of nCOV in the country, has alone reported 2.9 lakh positive cases and 11.2 thousand death cases as on July 16 as against country’s corresponding totals of 10.1 lakh and 25.6 thousand. If the trend goes like this, India would not require much time to even surpass Brazil to reach second top position in respect of positive cases in the world after USA.

It is a matter of serious concern that long continued lockdown has adversely affected the national economy and millions of daily wage labourers, farmers and migrant workers suffered like anything. Students’ education of all levels has also been highly affected due to shutdown of educational institutes almost indefinitely.

The dimension of the problem in this respect has become such that whatever steps taken by the governments and other agencies are not sufficient. On the other hand, the relaxation of inter-district, inter-state and international movement of people and allowance of many human activities, which started during lockdown-3, has further contributed to the onset of community transmission in most parts of the country with varying magnitude.

This rise has also been associated with introduction of quick testing device among large number of people in the suspected areas. However, the overall death rate in the country (2.55 per cent) has still been under control as compared to the world average (4.25 per cent).  Although the number of infections has been rising alarmingly in recent times, it has also been compensated by considerable increase in recovery rate (from 11.88 per cent on April 14 to 63.31 per cent on July 16) in the country.

However, the phenomenon of COVID-19 has already taken a serious turn in the states of Maharashtra, Tamil Nadu and Delhi in respect of infections and death toll, which together constitute around 56 per cent and 66 per cent of the country’s respective totals.

Most importantly, it has been observed that the infants and elderly including the people with serious pre-existing illness are more vulnerable to Covid-19, and as such the fatality rate has also been very high among them due to the triggering effect of Covid.

This is more so among the people with comorbidity in cardiovascular diseases, respiratory diseases and cancers, which otherwise also cause deaths to around 5 million people every year in the country.  While the data of daily rising spike of infections due to nCOV to as high as 35 thousand reveal the cases with both comorbidity and asymptomatic conditions, the daily rising incidence of fatality to as high as 680 is indicative of major  contribution from serious preexisting illness.

In fact, nowadays whoever suffers from any disease, he or she has to undergo Covid-test, and as such if the person unfortunately dies due to some pre-existing disease along with Covid positive, the person is included as Covid death.

In view of such situation, recently ICMR rightly announced to see whether the person died primarily due to nCOV or any other disease. Of late there has also been spread of infection even among the COVID warriors (including doctors), police, armed forces and media people in large number.

The Indian Medical Association (IMA) latest sources reveal that out of more than 1,200 doctors so far infected by nCOV in the country around one hundred sacrificed their lives while discharging duties. This is a very serious matter and hence question arises, “if the health workers, more particularly the doctors, are not safe, how can they save the lives of lakhs of infected people?”

At any cost we must ensure protection of the health warriors to win the fight against Corona. The occurrence of many deaths of nCOV patients without any serious symptom or preexisting illness in recent time has also drawn attention of all concerned. Moreover, the situation in some areas like Assam has become critical due to devastative floods and erosion, which have made maintenance of very protocol of social distancing a mess.

Amid such a grievous situation there has also been growing crisis of hospital beds including ICUs and medicines in different parts of the country.  It is important to remember that as the infants and elderly including the people with serious illness are more prone to this disease and can become fatal, we all irrespective of our age and immunity condition should remain careful so that it does not transmit to them from us.

In any case, the situation in the country with time is getting grim like that of USA, and we all have to be very careful in our behavior until we get the good news of COVID-19 vaccine. At this hour attempt should be to conduct more and more testing among the people to isolate the infected and suspected people from the population across the country.

Dr Bimal K Kar is professor of the department of Geography, Gauhati University.  He can be reached at: [email protected]