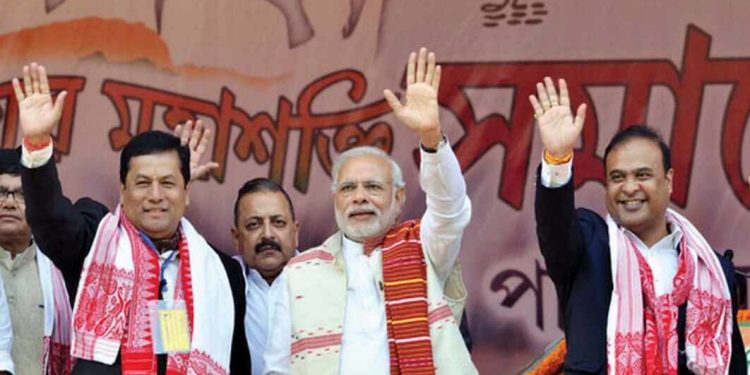 How is the present state government attending to these problems and priorities? All of us know that the BJP released a vision document in 2016 before coming to power in Assam. That was their plan for the development of Assam.

They said that once they came to power, they would implement everything mentioned in the vision document. They promised a lot in health, education, agriculture and employment generation. They also promised to solve the problems of floods and erosion in Assam and assured the implementation of the Assam Accord.

Development is the foremost thing for a state which means offering livelihood to people and taking care of education and health. But it is easier said than done. It is important that all developmental plans for a state should be futuristic and environment friendly. Again, a state must see to it that no person goes to sleep empty stomach. That means while planning for the future it must not ignore its urgencies.

Sadly the BJP-led state government in Assam did not fulfill any of their election promises. Their Vision Document has become an embarrassment for them now. Forget about the implementation of the Vision Document. Many regular things are not being attended to and things are not maintained properly due to the shortage of funds.

One criterion of development is easy mobility. Mobility is the speed of development. For easy mobility, we need connectivity and good quality roads all over the state. But roads are in bad shape in Assam. Even the condition of national highways is pathetic in many places.

However, we have been observing frantic activities on the part of the government in recent months. They are dolling out money here, there and everywhere. They have been disbursing money to different categories of people. The entire modus operandi is such that it is obvious that the main objective is to win over the allegiance of certain sections of people for the ruling party in the coming elections.

Also, there are huge anomalies and nepotism in the disbursement of funds. In most cases, the beneficiaries are supporters of the ruling party.  It may be necessary for the government to offer some provisional financial assistance to some people when there is a humanitarian crisis.

But if you ignore the long term developmental objectives and concentrate only on creating beneficiaries for electoral gains, it is a mere wastage of resources. It is also detrimental to the growth and development of the state. Let us explain why it is so.

We have discussed above the development ideals of a state. We also need to add that except for certain services such as health, education and etc. all developmental projects, in the long run, should be sustainable and self-sufficient. For any such project, the initial investment may be made by the government. But if in the long or short run the project cannot stand on its own it will ultimately fail.

Why does a project need to be sustainable and self-sufficient? The reasons are obvious. A project is run by the people and for them. Once it is sustainable and self–sufficient the people engaged in the projects are not dependent on anybody. They become empowered. But if we look at the spending of money by the state government we shall find that all these developmental objectives have been ignored by them in most of the cases.

It seems their main thrust has been creating beneficiaries. When you dole out money to people ignoring these aspects, you make them permanently dependent on the government. But money given to the beneficiaries is also not that important for them, because it does not affect their life radically as the amount given is not a considerable sum and in most cases, it is only a one-time affair.

Still the beneficiaries express their gratefulness and remain beholden to the government after all it is money and they have got it just for a song. And all this is happening now when the state is going for Assembly elections.