Asomiyas be told advent of spring inevitable, winter must pass away

Considering the massive strength enjoyed by the BJP-led NDA and its supporters in both the Houses of the Parliament, it is almost a certainty that the CAB will become an Act no sooner the Bill is introduced 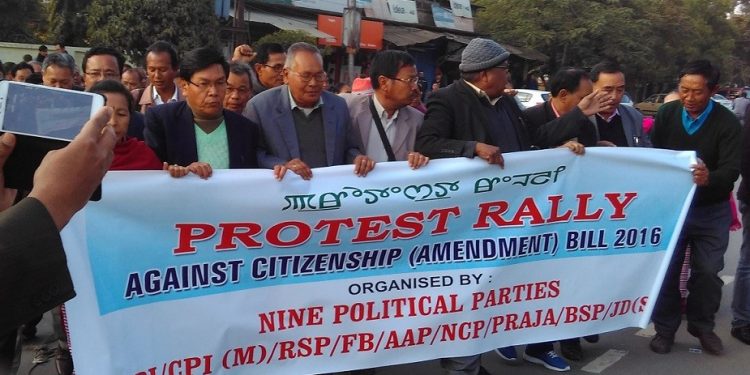 Representative file image of protest against Citizenship Bill in Northeast.

Addressing the 4th conclave of the North East Democratic Alliance (NEDA) in Guwahati recently, Union home minister Amit Shah asserted “illegal immigrants will not be allowed to stay not only in Assam but also in any other state. Our intention is to expel illegal immigrants from the entire country and not just Assam.”

It may be highly pertinent to point out at the very outset that use of certain terms on the politically volatile subject of immigration from neighbouring Bangladesh has made the issue a reservoir of mounting confusion while an undercurrent of religious extremism exercised by certain vested interests is beginning to exert strong jerks across the political landscape, particularly in Assam and the Northeast for that matter.

With religious plank(s) being created by such forces, the emerging scenario being that with every passing day the burgeoning confusion is giving rise to growing tension to the point of brewing communal frenzy in certain quarters.

The very term ‘illegal migrants’ used by the Union home minister is in itself highly perplexing. The term gives rise to the question and the possibility if the notion of ‘legal immigrants’ also exists. Expecting any clarity on the term ‘illegal immigrants’ or a clear cut definition on the same from the BJP top brass may be akin to looking for a needle in a haystack. Such confusion is always a potent armoury and source of greener pasture according to needs for those wielding power in India at any point of time.

It is almost a certainty that the chaos and confusion over the issue will continue to traverse across the political spectrum of Assam and the NE like a pendulum to the delight of many a political heavyweight entrenched in the luxury of the cosy comfort of their air-conditioned chambers.

However, virtually all confusion seems to vanish into thin air, when the issue of ‘illegal immigrants’ is considered in the backdrop of the upcoming Citizenship (Amendment) Bill. Talking to section of the press, a State BJP heavyweight stated that the fresh CAB to be drafted is likely to be vastly different from the one that had lapsed with the last Lok Sabha coming to an end.

He emphatically stated that the new Bill would not touch Article 371 of the Constitution. In this respect it may be pertinent to state that so far as the North-east is concerned, Art 371-A is of vital importance for Nagaland, 371-B for Assam, 371-C for Manipur, 371-F for Sikkim, 371-G for Mizoram and 371-H for Arunachal Pradesh.

He also stated that Administration and Control of Scheduled Areas and the Sixth Schedule pertaining to Assam, Meghalays, Tripura and Mizoram would be outside the purview of the new CAB.

Meanwhile, observers are of the view that the core essence of the new CAB would be the same as the earlier one which would be to legalise the stay of Hindu Bangladeshis in the country. This in turn would lead to their attaining citizenship in due course. In this respect December 31, 2014 is also pronounced by some saffron heavyweights as the possible new cut-off date.

Whereas the BJP bigwig has stated that the Bill would be introduced in the winter session of the Parliament, the all important question that surfaces pertains to the accommodation of lakhs of Hindu Bangladeshi nationals in Assam and the North-east for that matter. Focusing on Assam and the Northeast, an observer can certainly raise the ‘mati and bheti’ issue in respect of the Hindu Bangladeshi nationals and question the Government as to where the huge lot of presently foreign nationals to be sheltered after the CAB becomes an Act (in the process of becoming citizens) will be accommodated.

Will the indigenous people be forced to compromise with their ‘mati and bheti’ for the accommodation of the foreigners? Or will the Government make available vast stretches of government land when lakhs of landless indigenous people across the State are crying for land?

In the matter of accommodating lakhs of foreign nationals, the vital issue that appears to be under definite threat is demography. Matters closely related to one’s personal and social life like language, culture, religion, existing amity and the like constitute important elements of demography.

As of now, the demography of Assam is already in an extremely fragile state caused by the presence of lakhs of Bangladeshis, both Hindus and Muslims. Further accommodation of foreigners with their own language and culture is likely to cause a severe bombardment on the existing demography while a genuine fear lurks if the indigenous people of Assam would become minorities in their own land as in the case of Tripura.

Again, note may be taken of the fact that demography evolves over ages and cannot be imposed through the political whims of the high and the mighty. A healthy and positive growth of demography (as in the case of the last five hundred years in Assam) takes place in a tension-free milieu constantly fortified by an atmosphere of peace and bond of friendship among all. Only such an atmosphere facilitates the healthy growth and upholding of demography.

Meanwhile, stance of the people of Assam so far as the CAB is concerned should not be lost sight of if the issue is to be considered in the right historical perspective. In its 2019 election manifesto, the BJP made it clear as daylight that if voted back to power, the CAB which had lapsed with the last Lok Sabha coming to an end, would be re-introduced in the Parliament.

This was reinforced with utmost emphasis by almost every super heavyweight of the saffron brigade, including Prime Minister Narendra Modi and party president now also Union home minister Amit Shah, with loud announcements on the same in numerous election campaign meetings in the run-up to the 2019 Lok Sabha polls. There was no hide and seek. From that standpoint, Amit Shah has not made any new announcement in Guwahati recently and nobody has the right to point a finger at the Union minister for the fresh announcement on the CAB.

Weighing the matter in the appropriate and semi-legal perspective, one may opine that through the ruling party’s election manifesto, the CAB was projected, technically speaking, in the garb of a referendum before the people of Assam during the 2019 polls.

While the answer could have been either in favour or against, significantly the people of the State in overwhelming number favoured the coming of the CAB through its 2019 mandate in support of the BJP.

While some people in some corners of the State may take to protest against the Bill once it is introduced in the Parliament, the 2019 mandate is a clear indication that an overwhelming majority of the people, through their 2019 mandate, have seemingly, at least in principle, forfeited their right to oppose the Bill.

Presently, considering the massive strength enjoyed by the BJP-led NDA and its supporters in both the Houses of the Parliament, it is almost a certainty that the CAB will become an Act no sooner the Bill is introduced in the central legislature.

Be that as it may, the upcoming CAB and the Act to presumably see the light of the day sooner than later read with the earlier CAB draft, makes it crystal clear that all Hindu and non-Muslim immigrants (‘legal’ or ‘illegal’ makes no sense) who had entered India tentatively up to December 31, 2014 (the date as being aired) are presently all set to become citizens of India.

Again, it needs just ordinary common sense to apprehend the open secret that at least so far as Assam and the NE are concerned, the number of Christian, Sikh, Jain or Buddhist immigrants may be almost close to nil, while virtually the entire non-Muslim immigrant population may be Hindus.

On the other hand, the Government has not as yet made public a piece of its mind in respect of the post December 31, 2014 immigrants. Almost for sure, New Delhi is unlikely to throw open the next card on the issue till at least the Bill becomes an Act and the path set for lakhs of Hindu foreigners to become Indians widens at an electrifying pace into a super fast highway.

While the political culture of the country since independence is firmly focused on the one-point agenda of multiplying and consolidating vote bases and vote banks by hook or by crook even if it entails the performance of the ‘magic’ of making foreigners into voters, a political analyst may be of the view that extension of the CAB provisions beyond the much aired tentative date of December 31, 2014 may hit the headline at an appropriate and future date. There is no guarantee that periodic extension as in the case of the reservation policy will not come to stay as a permanent feature for the realisation of the apparently avowed goal of a Hindu theocratic state by the powers that be.

An informal but powerful beginning in this respect has seemingly been already made with a large number of saffron heavyweights having taken to, perhaps with meticulous calculation, loud talking about Hindu Rashtra openly in public forum while dumping all ingredients of secularism as enshrined in the Constitution by the wayside dustbin.

In several of its rulings, the apex court has laid down that secularism is one of the essential pillars of the fundamental structure of the Constitution. In the good old days, any comment in public domain against the basic framework of the Constitution would have attracted criminal and contempt of court proceedings. However, now that a situation of ‘parivartan’ has become the order of the day and many of the national institutions and organs of the Government have seemingly as well as formally been diluted of their original toughline, one can openly debate and argue in public domain that India had always been, is and will continue to be a Hindu theocratic state.

As of now, it appears that one just needs a Hindutva plank to enjoy absolute freedom of speech and expression without any restriction on issues pertaining to the promotion and propagation of Hindutva. Meanwhile, one may only rue over the development that the judicial horizon is seemingly no more adorned by gems like Justice Krishna Iyre.

While with the exception of the Muslims, the immigrants belonging to several other religious faiths that have their presence in India will enjoy protection, at least in theory, once the CAB becomes an Act, some members of the conscious circle are beginning to question if the going may turn out to be a tough litmus test for the Muslim immigrants whose detection/identification may become the core issue. While the vast majority of Muslim immigrants are likely to land up in the Foreigners’ Tribunal, one is not quite sure as to what new laws may be up the sleeves of New Delhi and Dispur on this count. What definitely is sure is that it may be many long years, or even decades, before the thick dust finally settles down.

As of now, while an atmosphere of uncertainty, confusion and chaos seems to loom large on the horizon, all trust must be laid on the Constitution that guarantees high principles like protection of life, liberty and property while assuring legal access to all.