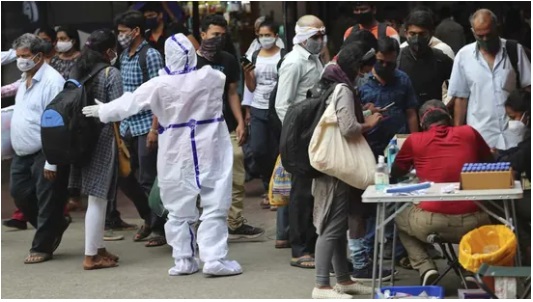 The first wave of Covid -19 in 2020 infected millions across the world and India was no exception. With the coming of autumn, the Covid -19 surge began subsiding and by winter of 2010-21 the pandemic was virtually gone. This indeed was the development across the entire globe.

Most unfortunately, the high Czars of Delhi sans any sagacity prognosed the development as an outright victory over the pandemic by nation headed by the powers that be. While a host of nations, including the US & UK, engaged themselves in placing orders for Covid-19 vaccines several times above the population figure way back in June-July-August 2020, New Delhi was indulging in self-glorification having ‘vanquished’ Corona.

It was only in January 2021, after having seen so many nations engaged in stacking up  vaccines, that India placed orders for a few crore of the same. In no time Delhi took to its egomaniac culture of  drum beating at global fora that India was exporting Covid-19 vaccines to several countries. The Godi media went ga-ga over New Delhi’s action and eulogized it as ‘vaccine diplomacy’ under the leadership of some ghost ‘vaccine guru’, while the powers that be termed India as the ‘pharmacy of  the world’.

Unlike the power hungry Czars, some silly bureaucrats and Godi media touts, the ‘Aam Admi’ has the common sense that sham glow of falsehood soon fades into eclipse. Accordingly, within a few months  of the mighty-mouthed ‘pharmacy of  the world’ announcement, New Delhi’s glee over its ridiculous ‘victory’ over Covid-19 turned black-faced. The ‘pharmacy’ turned into an empty godown under lock & key. Even the hoax ‘chowkidar’ of the ‘pharmacy’ vanished into thin air.

Next came to light the real ‘aukat’ of the so called ‘world pharmacy’. It showed up to the world as an empty abode of cobwebs, spiders, cockroaches et al – sans Covid-19 vaccine, Remdesivir, medical oxygen and other requirements to fight the killer virus. In the matter of Covidcare infrastructure also, the country cut an extremely sorry figure.

The outcome at the ground level turned exceedingly alarming with Covid cases multiplying across the country in astronomical figures. On its part Delhi could not go around the globe with the begging bowl for help in the wake of its sky-shattering statements like ‘pharmacy of  the world’ or the damage caused by the Godi media with terms like ‘vaccine diplomacy’ and ‘vaccine guru’. In the process India turned to be a real threat to the world community on the pandemic front. After all with the new year, the world community reinforced itself with the necessary requirements in the light of last year’s experience to fight Covid-19 afresh and make the world free of the pandemic.

Unfortunately, to the utter horror of the world community, India’s Covid-19 cases mounted to   over four lakh per day and was continuing to grow with accelerating momentum. It became highly pertinent for the world that India  be saved to save mankind. The result being that Covid-19 vaccines, medicines, compressed medical oxygen machinery and other requirements were rushed to India with fire-fighting urgency by several nations for India to fight the pandemic.

It is a curse on humanity that in India politics & power come first while humanity, human lives, human values, human rights or  healthcare service take a back seat. Even at the height of a growing pandemic when mountains of life-saving medical aids reached India  from various countries, the same remained untouched in Delhi for about a week as the high profile national Czars were away electioneering in Bengal. A clear instance that  votes matter most, not human lives under the present dispensation at the Centre.

Again, ours is a country where the most powerful state has earned the notoriety of throwing away hundreds/thousands of bodies of deceased due to Covid-19 into the Ganga or burying such corpses in sand on the banks of the river to be devoured by vultures, dogs et al. At the end of the day, despite tons of video evidence, no law comes into effect, while the authorities nonchalantly deny any such happenings. Indeed, the very core of fascism comprises of the anti-people ideology that a fascist is always right and that the general people are the greatest enemy and hence oppression and jail are an answer to the people for the rulers to cling on to power.

Sans vaccine, medicine, medical oxygen and other requirement, including infrastructure,  thousands succumbed to the deadly virus on a daily basis, mainly in Maharashtra, Gujarat, Delhi & UP. As is their culture, despite video evidence, the leaders of the ruling lot have always been on a denial mode over shortage of any requirement or that any death occurred due to any such shortage.

Meanwhile, the Gujarati news-papers led by ‘Sandesh’  and TV channels like ‘Sandesh News’ are known for projecting the pandemic death figures with near accuracy after several verification & cross-checkings. These figures are always several times above government figures. These figures are so reliable that a host of foreign dailies, including The New York Times heavily depend on the Gujarati  press with acknowledgement.
On the other hand, the ‘chowkidar'(s), the ‘vaccine diplomat’, the ‘vaccine guru’ and the prankster owner of the ‘pharmacy of the world’ have virtually gone underground only to appear on the TV screen after breaks to sing some bogus stereotype song like an old gramophone record spinning on the same groove.

Today, with medical aids like Covid-19 vaccines, Remdesivir, medical oxygen et al coming in from abroad, the pandemic has increasingly been brought under control.The  general opinion being that over the next one month or so the overall Covid-19 landscape may be virtually under near control. However, on the vaccine front, one ponders if the long journey could be completed within 2022.

Meanwhile, there may not be good tidings for the nation. Experts across the globe have opined at the possibility of a third Covid-19 wave this year itself. Hence, the need of the hour is make the preparation and draw up the needful home-work with all anti-Covid missiles in its arsenal  to squarely confront, if need be, any further Covid-19 wave.

May one dare to ask the Centre if it has framed up a matter-of-fact, down-to-earth & pragmatic road map to confront the third wave as warned by several Indian and foreign experts? The present set vaccines invented across the globe reportedly have no effect on the Delta variant of the virus.

This variant is not unknown in India and exerts opine that this variant may be at the forefront in the third wave. Has New Delhi any effective & functional plan to be executed by responsible hands to counter the third wave? For sure the nation would not like to have any more bullshit like ‘tali & thali’ or watch stupid ‘nautanki’ like ‘pharmacy of the world’ or ‘vaccine guru’. Further, on their part, the Godi media touts may do the minimum of service to the nation by refraining from causing more damage to India’s stature with their stinking rubbish.