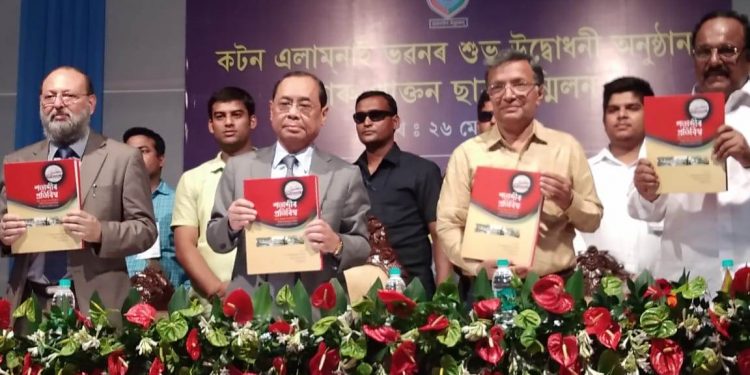 Chief Justice of India and Assam’s son of the soil Ranjan Gogoi on Sunday got nostalgic while attending the alumni association’s meet at Cotton University in Guwahati.

Gogoi, after passing the matriculation examination securing first division in 1969, took admission in Cotton College (now university) in arts stream keeping aside others’ advice to pursue education in science.

While addressing the young Cottonians, Chief Justice Gogoi said, “The world has been witnessing many injustices; several unwanted things are happening. Don’t be certain. Continue doing your work. Keep faith in God, you will achieve your goal.”

Instead of calling it a college or university, he said he would like to call it an institution.

Chief Justice Gogoi said, “If we call it Cotton College or University, its ambit will remain under a limitation. It’s an institution. I think, such an institution is like a pillar of the society. It also contributes to the formation of a nation.”

Stating that the present Cottonians feel proud recalling the ex-Cottonians, he asked the young ones to go ahead following their footsteps.

Chief Justice Gogoi said he would get involved with the institute again after his retirement as the Chief Justice of India in November this year.

Besides Chief Justice Gogoi, the event was also attended by the in-charge Chief Justice of Gauhati High Court, Arup Goswami, several other personalities connected to the institute and a large number of past students.

It may be mentioned that with the funds extended by Rajya Sabha MPs from Assam, Ripun Bora, Bhubaneswar Kalita and Biswajit Daimari, a building of the alumni association has been built at the premises of Cotton University.

The Cotton Alumni Bhavan was also inaugurated by CJI Gogoi.