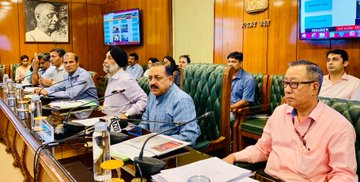 Union minister of state (independent charge) for development of north eastern region (DoNER) Jitendra Singh on Sunday said that a four-day festival ‘Destination Northeast’ will be held in Varanasi from November 23 next.

The festival will be held in the important site of Hindu pilgrimage to familiarize the people with the rich unexplored potential and opportunities available in the northeast region.

The festival promises to be a grand spectacle as a list of cultural programmes of the northeastern region has been lined up for the festival.

Moreover, food stalls selling diverse northeastern food items will be set up at the venue to satiate the taste buds of the visitors.

There will also be a business centre to offer entrepreneurship and livelihood opportunities in the region.

‘Destination Northeast’ will be held in a similar way as other kinds of festivals showcasing the diversity of the northeastern region had been held in other parts of the country such as Delhi and Chandigarh.

It may be mentioned that a three day cultural festival ‘North East Festival’ showcasing the diversity of the northeastern region will also be held in Delhi from November 8, 2019.

This year, the North East Festival which will reach its seventh edition will be held at Indira Gandhi National Centre for Arts in New Delhi.

In order to increase the footfall of visitors in the seventh edition of the festival, a variety of exciting programmes have been lined up by the organizers.