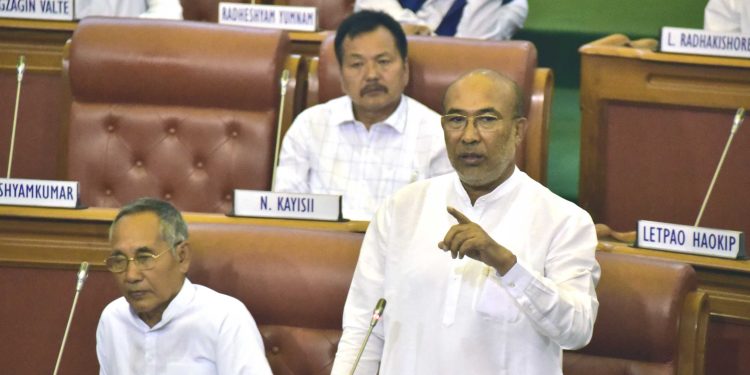 With obituary reference over the demise of three former members of the Manipur Legislative Assembly, the eighth session of the Assembly began on Monday.

The session will continue till Tuesday.

Initiating the session with a obituary reference for the three former members of the Assembly – Holkhomang Haokip, Dr Mashangthem Horam, M Chungkhosei, and former secretary of Manipur Legislative Assembly A Halim Chowdhury, the state chief minister N Biren Singh shared his sentiments for the departed souls.

In his remark, N Biren who is the leader of the House said all the former MLAs plays very important roles for the development of the State in different capacities.

Later, the leader of the House tabled Manipur private security agencies (regulation) rules 2019 and annual report of state vigilance commission for the year 2018-19.

At the same time the secretary of the state Assembly M Ramani intimated the house on the Governor’s assent to the bills.

Later Manipur chief minister N Biren Singh who holds Home portfolio replying to a call attention motion by opposition member Kh Joykisan of Thangmeiband constituency on the death of a school girl in the day’s session, said the death was very unfortunate.

He said the government is making necessary efforts to ascertain the truth about the incident.

Responding to another call attention by opposition MLA K Meghachandra of wangkhem constituency on the frequent seizure of contraband drugs, chief minister Biren also informed the House that the government will take up necessary steps to tackle the drug issue seriously.

He also informed the House about the ongoing steps which are being taken by the State Government so that those involved in the drug cases could be given befitting punishment.