Twitter family has a new member in Nagaland Chief Minister

“Greetings. I look forward to positive engagement with all sections of the people in our common endeavour to bring development and peace to Nagaland. With God’s blessings and people’s support we hope to realise the aspirations of the people as a collective team.”

Also read: Tough task ahead for Neiphiu Rio over fate of 22 elected legislators

Rio, who is camping in New Delhi with several of his Cabinet colleagues, had also tweeted that he had met Prime Minister Narendra Modi and had a positive interaction. 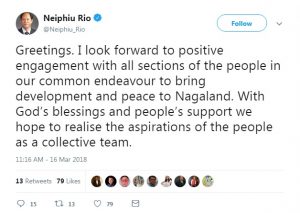 “I met the Hon’ble PM Shri Modi and had a positive interaction along with my colleagues. We are thankful for his support and guidance and look forward to working together in our common goal of nation building…”

Notably, Rio assumed office of the Nagaland Chief Minister for the fourth time.