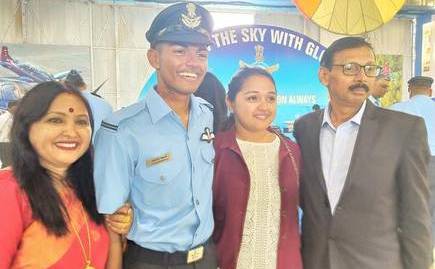 He has outshined his peers to bag the Sword of Honour and President’s Plaque awards for standing first in the pilots’ course at the Air Force Academy in Dundigal in Hyderabad.

“Since my childhood, I had a dream to be a pilot. Today, I achieved it. I also feel that anyone from Tripura can try and achieve this feat,” Arunabha said.

He said boys and girls of his age shouldn’t only aim to become a doctor or an engineer… aspiration must be skyhigh.

After completing Class XII from Sishu Bihar School in Agartala, Arunabha got admitted to the Rashtriya Indian Military College (RIMC) in Dehradun before joining the National Defence Academy (NDA) in Pune.

“I completed the pilots’ course at the Air Force Academy in Dundigal in batch no. 204. Now I have 130 hours of flying experience. I am expected to steer hawk fighter jet initially,” he said.

He said that he would like to fly Rafale fighter jets or even more critical aircraft in any hostile situation.

“I always wanted to serve the nation as an armed force officer and now I have got the opportunity to do so. I will definitely give my best,” Arunabha said.

Arunabha’s father Jagabandhu Chakraborty is an engineer, while his mother Alaka Bhattacharya is a homemaker.

On December 21, Chief of Air Staff Rakesh Kumar Singh Bhadauria conferred the President’s Plaque and Sword of Honour to Chakraborty at a ceremony in Dundigal.