Tripura reduces syllabus by 30% for Class 10, 12 students; decision on board examinations today 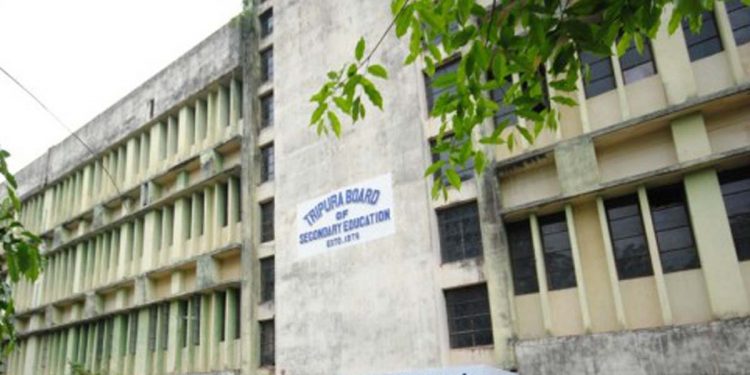 The building of Tripura Board of Secondary Education. File photo

The Tripura government has decided to reduce the syllabus for Class 10 and 12 by 30% for the session 2021-22 in order to cope up with the academic loss due to the second wave of Covid19 pandemic, said education minister Ratan Lal Nath.

Talking to Northeast Now, Tripura education minister Nath said, “Due to the Covid19 situation, the students are facing several problems with their studies and examinations. So the government has taken the decision to reduce the syllabus.”

“The students, who will appear in the Class 10 and 12 board examinations in 2022, will write examinations on 70% of their syllabus. This decision was taken recently keeping in view of the the pandemic,” said education minister Nath.

Last year, the Tripura Board of School Education (TBSE) had reduced syllabi for classes 9 to 12 only for one academic year due to the pandemic.

He also said it will be applicable for the candidates of board examinations next year.

All the educational institutions including schools, colleges and universities in the state have remained closed since April this year due to rise in the positive cases during the second wave of the Covid19 pandemic.

TBSE initially postponed the Class 10 and 12 examinations this year and later announced to conduct these examinations on selected subjects.

The final decision is yet to be taken in this regard.

The Tripura government is yet to come to a final decision over conducting the secondary and higher secondary examinations in the wake of Covid19.

In the wake of the rising cases of Covid19, the central government has cancelled the CBSE secondary and higher secondary examinations.

Following the path, several states have already cancelled their board exams.

However, the Tripura government is now trying its best to find a way to conduct the examinations.

A meeting will be held on Monday among the state education department, TBSE, state health department and other eminent academicians, psychologists and journalists to finalise the policy of the board examinations.