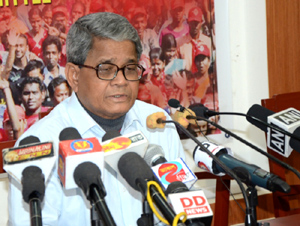 The Left Front’s debacle at the recently held Assembly elections in Tripura would affect the nation-wide Left movement temporarily.

This was stated by Tripura state secretary of the Communist Party of India-Marxist (CPI-M), Bijan Dhar on Wednesday.

Interacting with media at the CPI-M headquarters in Agartala, Dhar said that the state committee of the party has reviewed the poll outcome.

He said that CPI (M) politburo member Prakash Karat attended the review meeting which identified various ‘organizational and political causes’ for the defeat of the Left Front at the hands of Bharatiya Janata Party (BJP) and Indigenous People’s Front of Tripura (IPFT).

However, he said, ‘we would overcome the setback through various phases of party programme and actions.’

Dhar admitted that there was ‘lack of understanding and perception’ by the party about the ‘corporate backed BJP’s communal activities’ in Tripura.

He also observed that party was not fully aware about the micro-management and digital based activities of the BJP before the elections in Tripura.

He also said the BJP had invested huge money much ahead of the elections in Tripura to woo the voters and secured their winning.

Dhar also admitted that the party was unable to give organizational fights to BJP in their traditional bastions and admitted that all anti-Left forces had extended their direct or indirect support to the alliance of BJP and IPFT.