Tripura legislator and former veteran Congress leader Ratan Lal Nath, who lately joined the Bharatiya Janata Party (BJP), was served show cause notice by the Assembly authority asking him to explain why his membership will not be suspended under Anti Defection Law, according to official sources.

The show cause notice was served by the joint secretary, Tripura Legislative Assembly following instruction from Speaker Ramendra Chandra Debnath. 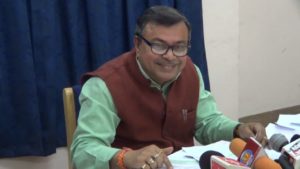 According to the experts, Nath is all set to face disqualification as he violated Anti Defection Law as he was the lone Congress MLA who switched party ahead of the Assembly elections.

Meanwhile, the BJP on Wednesday organized ‘partibartan rallies’ in all the 60 constituencies in the state, a day ahead of official launching of poll campaign.

A contingent comprising 36 leaders from Assam have already arrived in the state to intensify the party’s campaign for the 2018 Assembly elections.

Assam Health and Education Minister Himanta Biswa Sarma, who is also the party’s election in-charge for Tripura is having series of meetings with party’s core committee and other leaders on Thursday.

Later he is scheduled to address a rally at Dhanpur, the home constituency of Chief Minister Manik Sarkar.