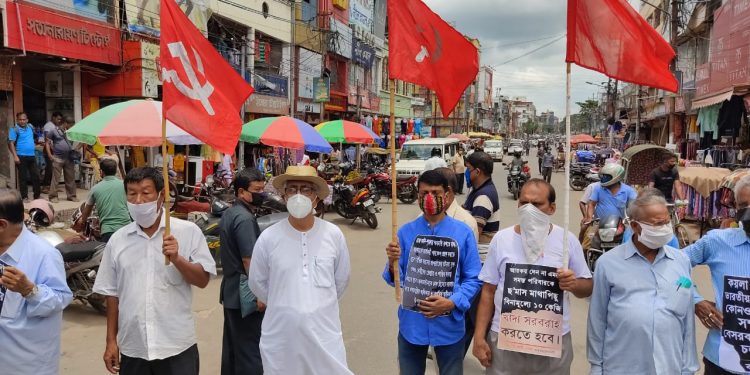 The protest has been organized in support of their six-point charter of demands.

The left leaders and supporters stood on the roadside and displayed placards and banners and shouted slogan in favour of their demands.

They, however, staged their protest maintaining social distancing norms.

Speaking to his partymen, Sarkar said the democratic rights have been curtailed in Tripura by the ruling party.

He said the ruling BJP is yet to fulfill the promises made during the poll campaign before coming to power.

He also said when people question the government, the goons attack them.

He alleged that the attackers are known by the government but police is inactive in this regard.

Manik Sarkar said they are compelled to hit the streets to restore the democratic right of the people in the State.

He further said they will not stop their fight until the democratic rights of the people are restored.

Manik Sarkar also criticized the Central Government and said, the government has said within August 15 the coronavirus vaccine would come.

According to Manik Sarkar it’s an impractical attitude on the part of the Central Government.

The Left Front convener and veteran CPI (M) leader Bijan Dhar accompanied by other leaders of Left Front alliance mentioning their demands said the government failed to boost the collapsed economy of the country during pandemic hours and for their failure poor section of the society is the worst sufferer.

Highlighting their demands Dhar said that despite the decrease in international crude oil prices, the prices of petrol and diesel are now beyond the reach of common people due to missives taxes and cess of the government.

Demanding immediate rollback of price hike of the fuel products, Dhar said that the government is now privatizing the national profitable sectors like coal mines and Indian Railway.

They said that Left Front will not allow the government to privatize the national properties, which will directly impact the poorer section.

They also demanded for filling up of all government vacant posts and alternative jobs for retrenched 10, 323 teachers, assistance for farmers during ‘khariff’ season and steps to improve the deteriorating law and order situation of the State.