Tripura CM Deb has expressed serious concern over the sudden rise in prices of onions and potatoes.

The chief minister on Tuesday said all the district administrations of Tripura have been directed to take action against those who have illegally kept essential commodities like onions and potatoes.

“Suddenly, some traders have artificially increased the price of potatoes and onions. All district administrations have been directed to take action against the stockholders,” said chief minister Deb said.

Along with other food items, three kilograms of potatoes and two kilograms of onions are also being provided under the package. 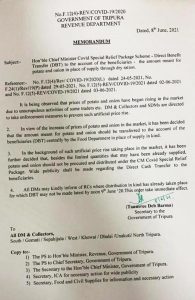 “The move is aimed at giving a lesson to the stockers and black marketers,” Deb said.

A notification, issued on Tuesday by Tanusree Deb Barma, secretary to the government of Tripura, directed the district magistrates, collectors and sub-divisional magistrates to take measures to prevent artificial price rise.

“In the background of such artificial price rise taking place in the market, it has been further decided that, besides the limited quantities that may have been already supplied, potato and onion should not be procured and distributed under the CM Covid Special Relief Package,” the memorandum said.