The Tripura Education Department has cancelled physical attendance of students in colleges and other institutes as notified yesterday. This decision has been taken by the State Education Department “in view of not receiving positive response from the Health & Family Welfare Department of Tripura” in regards to reopening of Colleges.

The Education Department informed this fresh decision in a notification and stated that it will remain in effect until further notice from its end.

Meanwhile, schools in the State also remained shut today. Earlier, the Tripura government had announced that educational institutions across the state will open from today onwards. 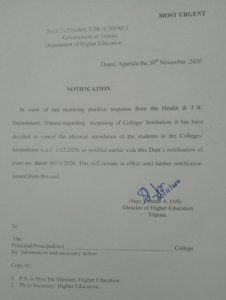 In schools, classes were to resume only for students of standard X and XII and all teachers would have to be present in the schools. Students were allowed to attend schools after attaining permission of their parents.

The State Education Department also issued a circular in this regards on November 27, after a meeting of the Department’s high-power committee.

Earlier, former Tripura Chief Minister and CPI-M stalwart Manik Sarkar had openly opposed criticised the Education Department’s decision to re-open schools and colleges. In a public meeting, he stated that re-opening of educational institutes would be dangerous for the students.