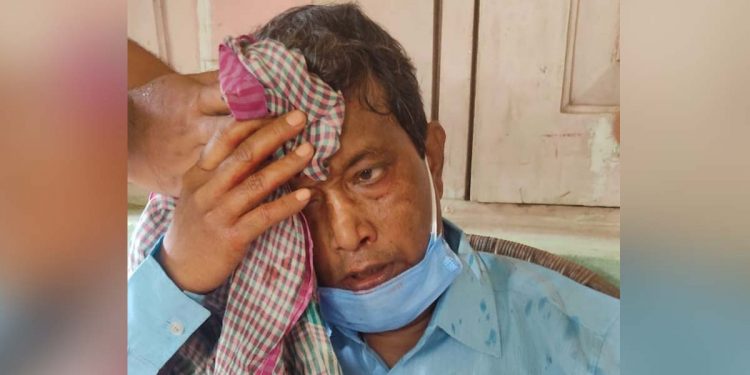 Senior CPI(M) leader and MLA Sudhan Das was injured after BJP supporters allegedly attacked him while the opposition party was holding a protest rally on Sunday at Belonia against rise of the prices of petroleum products and essential commodities.

As part of an all-India programme of five left parties, the CPI(M) organized a procession on Sunday at Rajnagar under Belonia sub-division, 89 km away from Agartala in protest against continuous rise in petrol prices.

After holding a protest rally in the Rajnagar area, the CPI(M) leaders, workers and supporters gathered at a street corner near the bus stand and at that time the BJP workers allegedly started pelting brick-bats at CPI(M) leaders and workers in which MLA Sudhan Das was injured.

Several other party leaders and activists were also injured.

BJP workers also allegedly attacked the residence of Sudhan Das and pelted firecrackers and bricks at his house.

It has been alleged that BJP workers gathered in front of the hospital in Belonia town, for which the MLA could not be rushed to the hospital.

Later, Das was taken to the Udaipur district hospital and the doctors stitched his head.

It has been reported that the CPI(M) workers, who participated in the rally, retaliated the attack following which some BJP workers were also injured.

Source said the police had to fire tear gas to disperse the mob.

At least 13 people from both sides were injured in the clashes including BJP mandal president Ranjit Sarkar.

Meanwhile, a statement from CPI(M) condemned the incident.

The statement said at around 9.30 pm on Saturday night, BJP miscreants came to Kamalpur on bikes and cars, attacked the house of panchayat member Asharani Namahsudra, vandalized it and set it on fire.

The CPI(M) attacked the workers and seriously injured two of them.

Before the fire service vehicle arrived, the locals rushed to douse the fire.

She was attacked by BJP workers after panchayat member Asharani Namahsudra on Sunday announced that she would leave the saffron party and join the CPI(M).