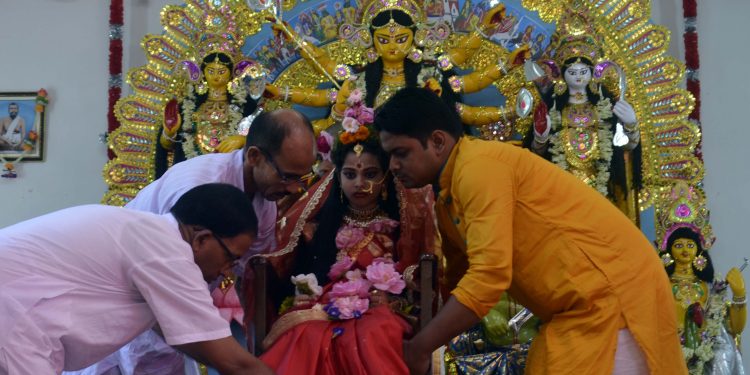 The traditional Kumari Puja was observed at Kailashahar Ramakrishna Mission in Tripura on Wednesday on the occasion of Durga Ashtami.

Kumari Puja is the worship of a girl as the goddess Durga on the occasion of Maha-Astami.

The rituals of Kumari Puja began at 9 am where girls were worshipped as the goddess.

Kumari Puja was started by Swami Vivekananda in 1901 to underline the importance of women in the society.

This year one Didhiti Mandol from Kolkata is being worshipped as kumari. The girl is usually selected from a family, which is associated with the Ram Krishna Mission so that they have clear idea about the lineage of the girl.

Spiritually any girl who has not reached her puberty level or is incapable of procreation is considered as kumari.

The girl who is worshiped symbolizes the power that regulates creation, stability and destruction on the earth. The young girl fasts until the puja is over. She is made to sit before the goddess’s idol on a decorated chair with priests chanting hymns and drums being played in the background.

After the puja, the divinity of the goddess descends into the girl, said a monk of Ramakrishna Mission. As per Hindu mythology, goddess Durga killed Chando and Mundo, two demons at the confluence (sandhi) of Mahashtami and Mahanavami.