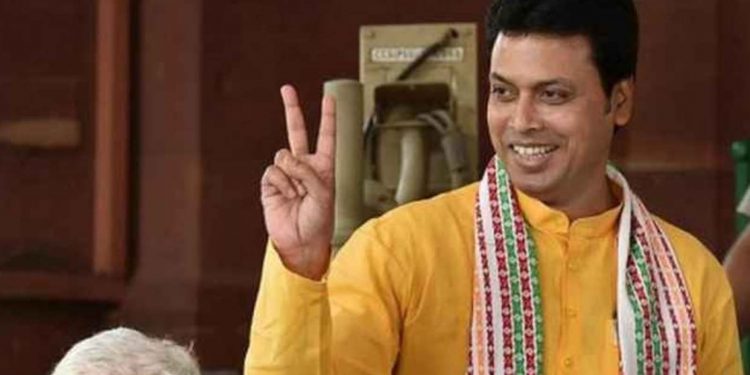 New faces are likely to be introduced in the Biplab Kumar Deb ministry in Tripura soon.

Speculations are rife about expansion of the Biplab Kumar Deb ministry with the visit of BJP’s national general secretary BL Santhosh in Tripura, followed by state’s dissident MLA Sudip Roy Barman’s meeting with party leaders in Guwahati and Delhi.

A party leader on condition of anonymity said BJP MLAs Sushanta Chowdhury and Biswa Bandhu Sen are likely to be inducted as ministers while one MLA from the SC category may be included in the Deb ministry.

Discussions are going on over possible replacement of Assembly Speaker Rebati Mohan Das with Ratan Chakraborty while two ministers may be dropped to induct new faces.

Talk on appointment of Arun Chandra Bhowmik as deputy speaker is also doing the round.

Meanwhile, ruling BJP legislators in the late afternoon of Friday held a closed-door meeting at the State Assembly building to discuss the present political situation and other relevant issues.

The meeting, which continued for more than two-and-half-hours, was attended by over 26 MLAs of the ruling BJP.

The MLAs reposed their faith on chief minister Biplab Kumar Deb and assured of full cooperation for the development of the state.

Tripura chief minister Deb reportedly asked the MLAs to look into the developmental activities in their own constituencies minutely and ensure that the government schemes and projects reach the needy.

After the meeting, MLA Arun Chandra Bhowmik said the several issues including the government projects and schemes were discussed during the meeting.

“We discussed the organizational matters and the problems faced by the MLAs in the meeting which was attended by the chief minister himself,” Bhowmik said.

Badharghat MLA Mimi Majumder refuted the media reports of any possible change in the state leadership and said, “The only person, who is capable to run the state, is Biplab Kumar Deb and all the MLAs have reposed faith on his leadership.”

However, former health minister and MLA Sudip Roy Barman abstained from the meeting along with two other MLAs of his group which reveals that everything is not good in the saffron party.

However, the results of the meeting is not yet disclosed,

But according to sources, he was asked to join as a Cabinet minister or wait until the central leaders revert back to him.