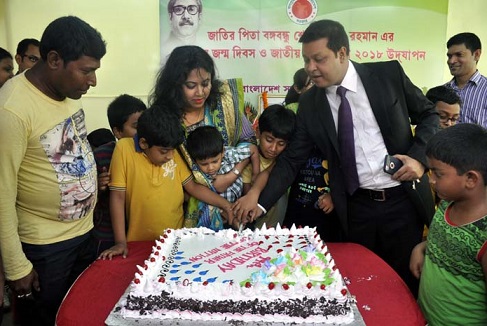 Tripura’s newly-elected Deputy Chief Minister Jishnu Dev Barman attended the programme as the chief guest and in whose presence the national flag of Bangladesh was hoisted to the tune of the country’s national anthem.

Floral tributes were paid to Bangabandhu’s portrait by Assistant High Commissioner of Bangladesh at Agartala, Mohammad Shakhawat Hossain and the Deputy Chief Minister of Tripura, Jishnu Debbarman and other dignitaries to commemorate the birth anniversary of Bangabandhu, the founder of Bangaldesh.

Besides cutting of cake, a painting competition among children was also organized and prizes were distributed among the winners.

Speaking to the media on the occasion, the Deputy Chief Minister Jishnu Dev Burman extended his tributes to Bangabandhu Sheikh Mujibur Rahman and said that the relation between Tripura and Bangladesh is not merely built on cultural and diplomatic lines.

Dev Barman said that the relationship between Tripura and Bangladesh is not only historical but also very vital and needs to further improve the trade relation.

He also mentioned that the royal family of Tripura, to which he belongs, had its estate in Bangladesh.

Meantime, Assistant High Commissioner of Bangladesh at Agartala, Mohammad Shakhawat Hossain said that Sheikh Mujibur Rahman had great contribution not only in the freedom movement of Bangladesh from the hands of the Pakistani but also sacrificed his life for the country.

A series of programmes were organised to commemorate the birth anniversary of Bangabandhu Sheikh Mujibur Rahman.