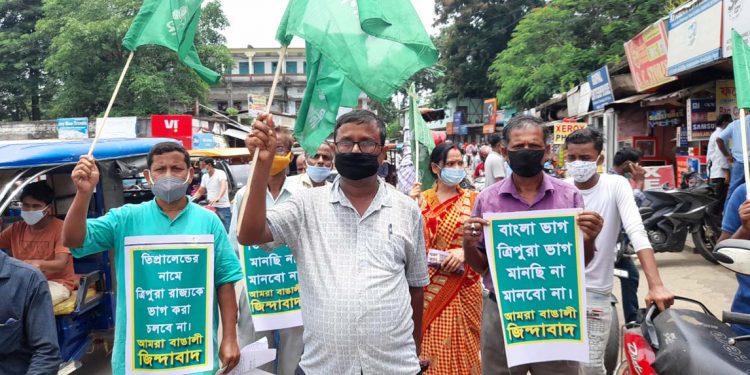 A view of the protest against Tipraland. Image credit - Northeast Now

Amra Bengali took out a rally in protest against the Greater Tipraland Bill passed in the session of the Tripura Tribal Areas Autonomous District Council (TTADC).

The Greater Tripland Bill was passed in the ADC session four days back.

The ruling Tipra Matha party introduced the bill in the House.

However, the opposition BJP MDCs did not oppose the bill.

But the State Committee of Amra Bangali protested against the bill in the old motor stand area here on Monday.

“The Sixth Schedule Act may not apply here. The Constitution has been amended during the Left period. The ADC area covers three parts of the state. Jobs and land rights are limited to the Bengalis,” he said.

“They are moving towards forming Tipraland with the whole of Tripura in the name of Greater Tipraland. This claim is unfair, unreasonable and unacceptable,” he asserted.

“The leftists followed the same path. We call upon all to stand up against this conspiracy in the coming days,” said Gouranga Rudrapal, secretary of the State Committee of Amra Bangali.

He said the state would not be allowed to be divided in any way.

He said the protest programme was organized in the North Tripura district to oppose the bill.