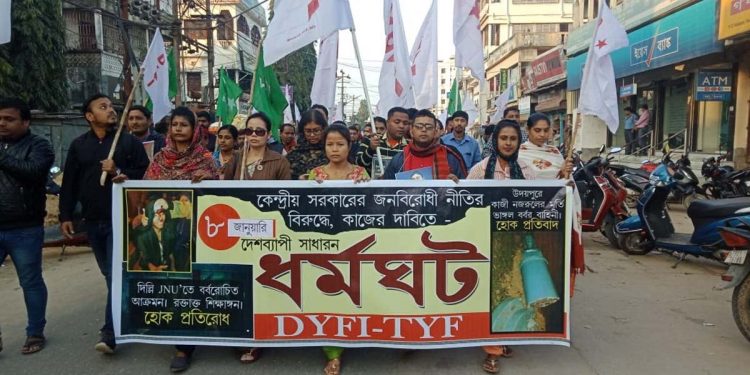 Members of DYFI-TYF taking out a protest rally at Agartala on Monday. Image credit - Northeast Now

Student activists from left parties and youths from various other organisations on Monday evening organised a rally at Agartala in protest against the attack in Jawaharlal Nehru University (JNU).

The agitating student leaders informed that similar kinds of protest rallies were organized across the state against the atrocity on the students and teachers of JNU.

They alleged that the attack in JNU on Sunday was carried out by Akhil Bharatiya Vidyarthi Parishad (ABVP) goons. However, the ABVP has already denied the allegation.

The rally started from the Chatra Juba Bhaban of Paradise Chowmuhani and crossed different parts of the city.

The left students and youths raised slogans against the JNU attack.

Also read: 28 including some students from Assam injured in JNU violence

Students of different organisations gathered in front of the City Centre and staged a demonstration against the JNU violence on Monday evening.

Some eminent persons were also present in the protest programme.

The All India Democratic Students’ Organisation (AIDSO) also protested against the masked mob’s attack on the students and teachers of JNU.

The AIDSO, also called DSO, took to the streets to protest against the horrific incident.

Meanwhile, DYFI, TYF and the students’ wings of the left parties have extended their full support to the trade unions’ strike on January 8 and held a massive rally in support of that strike.

DYFI state secretary Nabarun Deb said, “As employment issue is a part of the trade unions’ strike, so, DYFI and TYF have supported it.  DYFI will also observe the strike across India.”