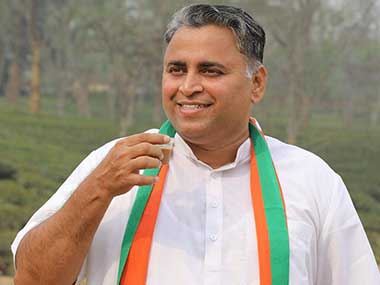 The BJP-led alliance which looks on its way to victory in Tripura, is made possible by the efforts of one man: Sunil Deodhar.

Sunil Deodhar who is originally from Mumbai, set up camp in the Northeastern state of Tripura, three years ago. He has also worked as an RSS pracharak in Meghalaya in the past.

Formerly of RSS, 52-year-old Deodhar was made the BJP state-in-charge by BJP president Amit Shah in November 2014.

After he joined the RSS in 1985, he was directed to make BJP a powerful force in Tripura – which has been a bastion of the Marxists for the past 25 years.

At that time, BJP had barely any presence in the state. Although Deodhar was not new to the art of managing election campaigns, making BJP a powerful force in Tripura was a fairly impossible goal.

In the past, Deodhar had managed Narendra Modi’s election campaign in Varanasi in 2014.  He was also marked for his performance in 2013 Delhi elections, when he worked from south Delhi against Arvind Kejriwal, helping BJP win seven out of 10 seats there. In 2014, Deodhar wrested the Palghar constituency from CPI (M)’s which was their only seat in Maharashtra.

Perhaps these are some of the reasons which convinced the BJP to send him to Tripura. For the past three years, he has worked tirelessly spending around 15 days a month touring all corners of Tripura.

Sunil Deodhar has a flair for learning languages, which is why he learnt Kokborok (native tribal language of Tripura) to help him establish a direct connection with the tribals, who form about 31 per cent of the state’s population. He was already fluent in Bengali.

He also set up a social media cell with a dedicated team for Twitter, WhatsApp, Instagram, Facebook, and other social media platforms. This move garnered a lot of support from the youths whereas the CPI(M), made up ageing leaders are not very well versed with the latest technologies and therefore had no presence on social media.

Apart from that the youth, denied job and business opportunities because of flawed policies by the Marxists, were angry with the CPI(M).

He also coined catchy slogans like “chalo paltai (come, let’s change (our rulers)” and “Tripura teh gorib more, mukhya mantri chopper a chorey (while the poor die in Tripura, the chief minister rides a chopper)” that became popular.

All these changes, developments slowly started to payoff when the BJP displaced the Congress from second place in bypolls to the Pratapgarh and Surma Assembly seats. The next year, the BJP performed well in the gram panchayat elections with winning 121 seats and bagged three gram panchayats.

Modi making it mandatory for one Union minister to visit Tripura every fortnight – helped. Deodhar turned the ministerial visits into opportunities to gain mileage for the party. He took the ministers to interior areas, which had never ever seen a visit by a Union Minister. He organized press meets by the visiting ministers where the latter highlighted central government schemes. Even two years before the polls, Deodhar created a buzz to generate publicity.

His meticulous planning over the last three years, untiring effort, political savvy, and eye for details have resulted in this victory.

It may also be mentioned that in this year’s election, the BJP made all efforts to become victorious in the Assembly polls to grab power in Tripura, the last bastion of the Left.

From Prime Minister Narendra Modi to BJP national president Amit Shah, a number of Union Ministers campaigned in Tripura to boost the poll campaign in the State.

Modi, Shah and other BJP leaders asked the voters in Tripura to vote for the BJP candidates and its alliance partner IPFT’s candidates to bring a change in the State which has been ruled by the Left Front for the last 20 years.