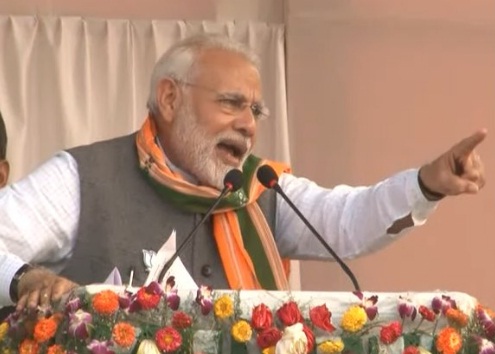 He was addressing a rally at Vivekananda stadium in Agartala.

“They murdered our BJP workers. They killed journalists,” Modi alleged. “Once we form the government here, we will conduct a high-level probe into all the political killings and killings of journalists,” he affirmed.

Drawing parity between red light of traffic signal and red flags of the Left Front, Modi said, “We have to stop in traffic when there is ‘Red light’. In the same manner Tripura will move on the path of progress when the ‘Reds’ (Left government) are removed from power.”

Prime Minister Narendra Modi accused the Left of maintaining double standard and said, “In Delhi, communists take out rallies for employment and give slogans for salaries. It has been 20 years, why labourers of Tripura don’t get minimum wages? Communists have no right to talk about poor and labourers. It is their double standards.”

Pointing towards various scams that took place in the Left regime in Tripura Modi said, “The total area of ponds and pits claimed to be dug under MGNREGA in Tripura turns out to be more than the total area of the state. This is the extent of daylight loot under the Manik Sarkar government.”

Launching a scathing attack on the Tripura government the Prime Minister said the people of Tripura will not stand the Communist party’s government. “Bid them such a farewell that they cannot return. So that they could not run the businesses of extortion and atrocities again,” he said.

The Prime Minister promised to ‘repay’ the love and support of the people of Tripura with interest by ‘flooding’ Tripura with development.