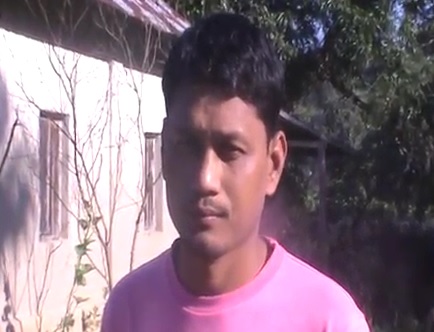 Subrata Debbarma, one of the abducted bank employees, at his home after his release.

Sources said the abducted bank employees were released somewhere in Gandacherra against payment of ransom amount of Rs 50 lakh.

It could not be ascertained whether it was an act of miscreants or militants. The abducted bank employees however confirmed that the group was in possession of sophisticated arms including those of AK series.

One of the employees Subrata Debbarma said that around eight to ten armed miscreants had blocked the road with a tree before kidnapping them. They were kept somewhere between Taidu and Ompi. The miscreants had tied them with chains and covered their eyes. Last night they were released at around 12 and later they managed a MAX vehicle from that area and returned home at Teliamura at around 6 this morning.