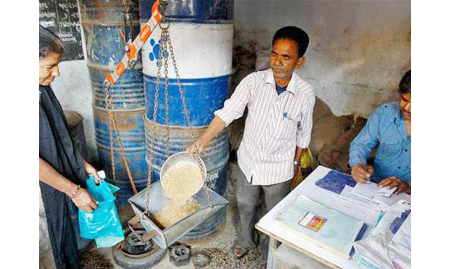 The Central government has asked the northeastern states to expedite the computerisation of the Public Distribution System (PDS) to ensure greater efficiency and transparency, and to check large-scale fraud.

“After the digitisation of ration cards and computerisation of PDS, transparency and performance of the government-sponsored food supply system will improve and various fraudulent acts and falsification will be curbed,” Union Food and Public Distribution Department Director D.K. Gupta said here.

“After full operationalisation of the computerised PDS and digitisation of ration cards, infiltrators and fake beneficiaries will not be able to benefit from PDS. Infiltration of people in the northeastern region from across the borders is a major issue,” he said.

The official said that while digitisation of ration cards in most states, including in the Northeast, was completed, progress of Aadhaar seeding in ration cards was very poor in most of the states in the region, except Tripura and Sikkim.

He said seeding of Aadhaar in ration cards in Tripura and Sikkim was at over 90 per cent, but in the other northeastern states this was on an average only at 30 per cent.

“The situation is extremely bad in Meghalaya, Nagaland, Manipur and Mizoram,” he added.

Gupta, who was here to address a two-day workshop on “Digital Transformation and Automation of PDS Operations”, said that the Central government had asked all the northeastern states to complete digitisation of ration cards and computerisation of PDS by June this year.

He said the Centre had introduced “Integrated Management of Public Distribution System (IM-PDS)” to integrate the PDS system, portals of states and Union Territories with the Central System and portals, introduction of National Portability and de-duplication of ration cards and beneficiaries.

“The new scheme would bring more transparency and efficiency in the distribution of food grains as it would improve the mechanism to identify fake and duplicate ration cards and provide the option to PDS beneficiaries to lift their entitled food grains from Fair Price Shops of their choice,” the official added.